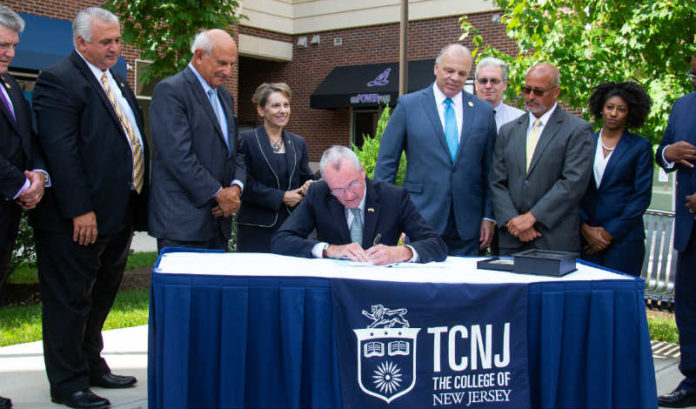 “Today, I’m proud to enact bipartisan legislation that gives our communities greater opportunities to benefit from common-sense public-private partnerships for essential construction and capital projects,” Murphy said in a prepared statement. “Democrats and Republicans alike recognize the tremendous benefits that can arise when public officials and private-sector partners work together. By doing so, we give state, county and local officials the much-needed flexibility they need to improve their communities while creating good-paying new jobs — in most cases, good union jobs — while leveraging private capital to invest in public infrastructure.”

Previously, state or county colleges could enter into “P3” agreements, but this bill expands eligibility to other public entities.

“Public-private partnerships have produced enormous benefits to our state colleges and universities in the form of infrastructure improvements,” Assembly Majority Leader Lou Greenwald (D-Voorhees), one of the bill’s sponsors, said in a statement. “We’ve seen public-private partnerships help Montclair State University build a new dormitory and The College of New Jersey build a mixed-use campus town. I want to see the same results in our public schools, highways and government buildings as a benefit to our taxpayers.”

Murphy signed the bill at The College of New Jersey’s Campus Town development.

The signing drew support of union leaders, with the legislation including rules on wages and labor agreements, among others.

“We’re pleased with Gov. Murphy’s signing today of legislation to expand public-private partnerships in New Jersey,” Greg Lalevee, business manager of IUOE Local 825, said in a statement.
“Our infrastructure systems are in dire need of repair and funding, and public-private partnerships offer the private sector an effective and credible way to contribute and invest in them and other key projects. The bill’s provisions to create good-paying jobs, ensure prevailing wage requirements are met and encourage project labor agreements will help boost employment in our state and will directly improve the lives of hardworking New Jerseyans.”

The state treasurer and New Jersey Economic Development Authority would have certain oversight and approval of such projects, and local public input and finance controls, as well as land use and financial approvals, would be required.