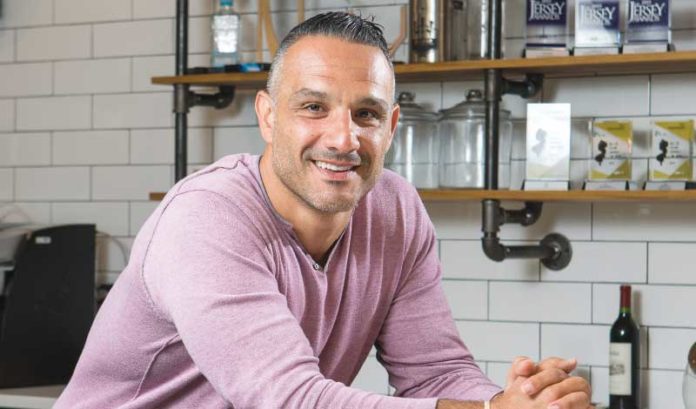 Soon after marrying his wife in 2005, Darren Magarro left his job in New York City.

And he did it with style.

“On a Friday afternoon, I did my best Jerry Maguire impression, drove to IKEA and bought a desk to start my own company from my front porch,” he said.

All while Samantha Magarro and his mother-in-law were vacationing in Florida.

“I waited for her to call me,” Magarro said. “When I told her I was starting my own firm, she said, ‘Great! When?’ And I said, ‘Tomorrow.’

“I had to hustle to put the pieces together.”

It was the right impulse decision for him and his family.

DSM, a full-service marketing agency in Mahwah, now employs 16 and earns more than $3 million in revenue while providing more flexibility for its employees and continued continuity of service for its clients.

Not bad for Magarro, CEO and president, who graduated from Lehigh University in 2000 with a degree in history.

“When I had trouble finding a job as a teacher, my friend suggested I interview at her media buying agency,” Magarro said.

He got the job. Then, after seven years working in media strategy and buying in New York City and Paramus with clients such as Toyota Motor Sales, Verizon Wireless, Boston Beer and Puma, Magarro decided to strike out on his own.

“I always had felt there was a better way to do things,” he said. “It wasn’t rocket science — but, even working with high-paid creative directors in New York City, ideas were often brought to fruition at the expense of other good ideas, which were tossed aside simply because nobody pushed for them.”

With the understanding that clients desired greater continuity with their agencies, Magarro partnered with his friend, Ryerson Kipp (now chief creative officer), to provide marketing and advertising services from concept development through public relations.

“We brought creative, digital, media buying, social media, website design, search engine optimization and more under one roof,” Magarro said. “Being able to communicate ideas without having multiple freelance creative designers or separate public relations firms is how we got our start, because clients were really attracted to that model.”

Employees, too, flocked to the agency for its full-service capabilities.

“But what fueled our growth the most was definitely our culture,” Magarro said. “Many of our employees came from higher-paying jobs in Manhattan for a better quality of life and more time with their families.”

When he started DSM, Magarro said, neither he nor his staff had children.

Now he has three between the ages of 3 and 9.

“I try to be home by 6 p.m. every night to have dinner with my family, and we, of course, preach that same priority to our folks in the agency,” he said.

It is no surprise, then, that half of DSM’s staff is women.

“It’s important to both Ryerson and I that we have a strong female presence within the highest levels of the agency,” Magarro said. “I feel there is something to be said for when a seasoned C-suite female leader is able to speak and work with the younger women in our agency over us.

“I believe their message of success is delivered much better.”

The company, which also currently employs five interns, celebrated its 10-year anniversary in 2017 by relocating from its office in Franklin Lakes to a new, 6,600-square-foot space in Mahwah, doubling its former size.

“We grew from three people to 21 people in just a few short years,” Magarro said.

DSM also has grown its revenue nearly 300 percent since 2012, he added.

“We struggled early on with closing our sales loops,” Magarro said. “We’d complete a project, but then would not be able to close the loop on our client’s sales cycle after we handed it off.

“By adding the digital arm of our agency, we now feel that not only are we are one of the best in New Jersey when it comes to content strategy and the customer journey, but we also can now tell our clients how many visitors and leads they’ve received, helping us get our clients closer to more educated consumers at the end of the sales funnel.”

“We’ve had a lot of wonderful wins, but with our rate of growth plus moving into a new office and increasing staff, the last six years of our lives also have been frenetic,” Magarro said. “However, DSM has continued to afford us the opportunity to have our own autonomy.

“We’re never going to be the largest agency, and that is on purpose — we have stuck to our core values of never wanting to be.”

Magarro said he is most proud of the fact that he has helped to create a place where he and his employees can have the best of both worlds when it comes to maintaining work-life balance in the industry.

“It is really cool, when we are able to step out of the weeds, to see just what we’ve built from an IKEA desk on a front porch,” he said.

New Jersey gets a bad rap in comparison to Manhattan, Darren Magarro, founder, CEO and president of DSM in Mahwah, said.

“It’s almost like we play second fiddle to marketing agencies there,” he said. “But many New York City-based agencies are highly specialized and therefore cannot bring the entire package together. That’s where we come in.”

Being located just across the river from some of the largest marketing agencies in the country creates quite the competitive atmosphere, Magarro said.

“But the difference between us and a shop in Manhattan is that we have long defined and accepted who we are,” he said. “We always are committed to our identity as a family-friendly workplace.

“For some people, it is all about the money — but for us, it’s about not only taking care of our people, but also theirs.”

When Darren Magarro told his mother-in-law that he was starting his own marketing firm, he said she told him two things:

“She said, ‘If you do this, you will take care of my daughter, and you also will give back to your community,’ ” he said. “That stayed with me.”

Magarro therefore not only encourages staff members at DSM to champion their own philanthropic initiatives, but also, participates in his own.

Magarro is a founding member of the Behind the Seams fashion show to benefit Eva’s Village, a nonprofit social services organization in Paterson.

“We will host our ninth fashion show in October to try to raise $1 million,” Magarro said.

Magarro also is a founding member of the Backpacks for Life golf outing, now in its third year, to provide homeless veterans with backpacks filled with supplies.

Lastly, Magarro serves on the mayoral-appointed parks and recreation committee in his hometown of Franklin Lakes and also on the board of directors for the not-for-profit REED Academy in Oakland for children ages 3 to 21 with autism spectrum disorders.

“The school also is now beginning The REED Foundation to help graduates past the age of 21 work on a vertical farm in Hackensack,” he said.

“Philanthropy always has been very important to our success and is at the core of everything we do.”

When the New Jersey Business & Industry Association hired DSM to reignite its membership engagement, the full-service marketing agency in Mahwah wanted to do something different.

“We needed to show the business community in New Jersey how NJBIA is here to help,” Darren Magarro, founder, CEO and president of DSM, said.

“We then invited businesses across New Jersey to submit user-generated videos making a case for why they deserved to win,” Magarro said.

“NJBIA received a ton of buzz; a worthy business won the cash award and business consulting; and we won an award,” Magarro said.

“It was a win-win for everyone,” Magarro said.