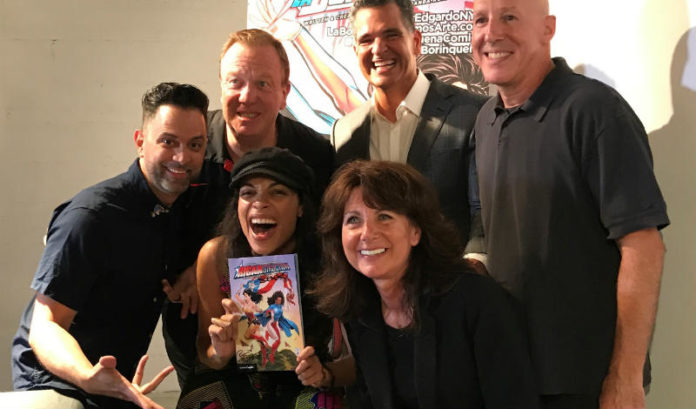 A four-time Emmy Award-winning show highlighting the Hispanic population is being reimagined and brought back to life after seven years.

Images/Imágenes went off the air in 2011 when New Jersey Network ceased operations and all of its programming was either dissolved or moved to other institutions.

Images/Imágenes was one of those that dissolved, but, for the past few years, its band has focused on getting back together.

The show’s restoration first began with funding from the Horizon Foundation for New Jersey for a special program that highlighted diabetes and obesity — two common health problems in the Latino communities.

That was one of the reasons Rutgers University hired William Sanchez, who had produced the Emmy-winning show, after NJN shut down, according to Isabel Nazario.

She said the health care program that aired on NJTV two years ago reached 15 million Latinos between the ages of 15 and 55.

“That, to us at Rutgers, was an indication that there is a need for such programs,” she said.

Especially at a time when the country is seeing an increase in divisive and prejudiced commentary.

The 30-minute show is going to cover a variety of subjects, including health and food, business, law and entertainment.

And it will have a mix of conservative and progressive show hosts.

“All of us work very closely together and know that, ultimately, our community represents all these voices. We don’t have only one voice,” Nazario said. “Our community, while disagreeing on, for example, religious perspectives — abortion, for example, is a really big issue — and concerns of the politics of the relationship of the U.S. to Puerto Rico or to Cuba, those things we all disagree on. But, we have more issues, more areas of focus, that we agree on.”

Carlos Medina, chair of the Statewide Hispanic Chamber of Commerce, and a board member of Horizon Blue Cross Blue Shield of New Jersey, is going to be one of those hosts and an executive producer.

Sanchez and Medina said the time to resurrect the show is now.

“Everything is falling into place,” Sanchez said.

That includes having a prominent Latina, Sara Peña, director of the Center for Hispanic Policy Research and Development at the New Jersey Department of State. That could lead to support from the current administration.

There is also interest from the Horizon Foundation and Rutgers University, as well as sponsors through the Hispanic chamber. And two stations have already expressed interest in airing the show.

How is that happening, despite the existence of prominent Spanish-language channels like Telemundo and Univision, as well as sports channels and entertainment stations airing separate programming catered to Spanish speakers?

Sanchez explained that, despite the breakthroughs the community has had, it isn’t represented well enough.

“When you look at when Latinos have been in Hollywood, they were always playing the same types of roles in different movies. So, what you’re doing is, now you have a lot of Latinos on television, but what you have is almost duplicate programs,” he said. “There are issues and people who are role models, heroes that went to war and could be your neighbor, and we don’t even know. So, we have to dig deep and find those stars of the community.”

The shows are going to specifically stay away from politics, Medina said, unless absolutely necessary.

And New Jersey is the perfect place to launch the show, despite larger populations of Latinos existing in other states, because New Jersey has played a prominent role in the community’s history, Sanchez said.

It is sandwiched between New York City and Philadelphia, but it has its own prominent region in West New York.

“The embroidery capital of the world is West New York. A lot of women found jobs there,” Sanchez said. “So, it was towns that were, like Union City, abandoned. They became rich with the Latino presence, even though Latinos in New York and Pennsylvania went through the same past.”

And the state continues to play a prominent role for Hispanic immigrants.

“For example, in West New York now, there are a lot of Mexicans. Why? That population didn’t exist,” Sanchez said.

Historically, Cubans had a stronghold in the area.

“If you talk about Arizona and California, where (Mexicans) were being kicked out … that’s what happened,” Sanchez said. “We’re the gateway to the Latino community’s explosion in the market. Even from California they come here.”

Medina said recording that change and following the developments that come from it, especially how it affects the economy, is important.

“The climate in this country is that Hispanics are a drag on the economy; it’s the opposite,” he said. “We are saving the economy. We are starting jobs and creating revenues. Just to show America what are the positive contributions of the Hispanic community.”