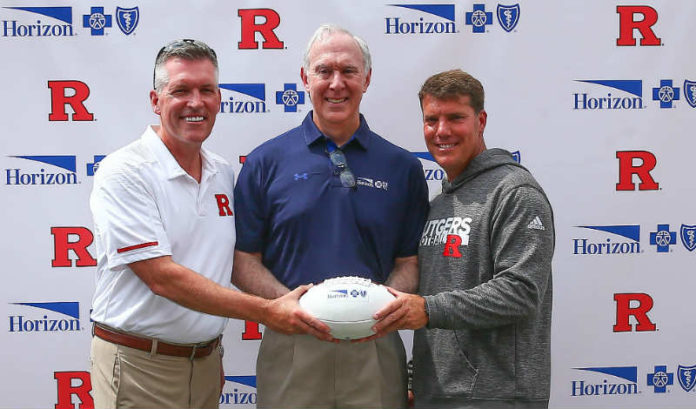 Rutgers University’s athletics program has signed a multiyear partnership with Horizon Blue Cross Blue Shield of New Jersey that makes Horizon the “Official Health Insurance Partner of the Scarlet Knights,” the two announced over the weekend.

The partnership, which Rutgers Athletics and Horizon said builds on an existing relationship, aims to use the pair’s standing as the state’s largest college and largest health insurer to positively affect New Jersey families by focusing on the promotion of healthier lifestyles for fans, according to a news release.

“This partnership brings New Jersey’s largest insurer and New Jersey’s largest university together in a new way to support the state’s top college athletes and help Rutgers students, alumni and fans lead healthier and more active lives,” Kevin Conlin, Horizon’s chairman, CEO and president, said in a prepared statement. “Horizon and Rutgers share a common commitment to New Jersey, and both are proud to be leaders recognized for driving innovations that improve the lives of every New Jerseyan.

“Horizon has a long history of working with Rutgers on academic, research and philanthropic activities, so this new partnership builds on what is already a very strong relationship between two ‘New Jersey Proud’ institutions.”

Rutgers’ football season — one of the college’s most popular Big 10 sports, despite recent struggles — kicks off its 2018 slate on Sept. 1. Conlin is a 1980 Rutgers grad and former Scarlet Knights football player, the release noted.

“We are thrilled to announce this great partnership with Horizon BCBSNJ,” Rutgers Director of Athletics Pat Hobbs said in a statement. “This is a tremendous opportunity to harness the reach of Rutgers Athletics with the state’s largest health insurer to positively affect countless New Jersey residents. Our mission to support the health and well-being of our student-athletes is perfectly aligned with the goal of Horizon BCBSNJ to educate and create awareness on the benefits of leading healthier lifestyles.”

Initiatives that will come on line as a result of the partnership include:

The partnership was facilitated by IMG, exclusive multimedia rights holder of Rutgers Athletics, the release noted.