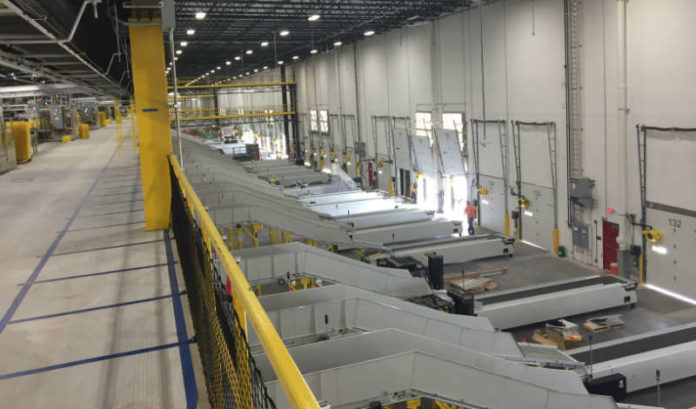 The pods, filled with randomly placed items in their baskets, will be maneuvered on the floor by robotic drivers that sit underneath them.

It is an example of how the latest Amazon fulfillment center in New Jersey — on schedule to open Sept. 15 in West Deptford — will come with the latest technology.

But if you think this technology will take away jobs, think again: Amazon will employ approximately 2,000 workers at the facility, the company’s ninth in the state.

Amazon took members of the media on a hard hat preview tour last Friday afternoon, showing off its latest facility while explaining how it will impact the region.

The facility is approximately 665,000 square feet in size, but, when measured over its three floors, it totals more than 1.7 million square feet.

Put another way: It could house nearly 30 football fields.

And the conveyor belts that are used to move packages around measure more than 12 miles in length.

Ryan Smith, a regional director of operations, said the facility is a showcase for the company.

“It’s the latest and the greatest in technology,” he said. “We’re thrilled to be able to bring it here.”

Smith said construction on the building is scheduled to be done by the end of the month. And while employees will first arrive Sept. 15, Smith said the facility will quickly get up to speed for the holiday season, shipping thousands of packages a day by mid-November.

Amazon already has announced its 10th location in the state — a facility in Burlington that is scheduled to open in 2019.

And, while the company has not announced any plans for future openings in the state, Smith said New Jersey continues to make sense regarding distribution center locations.

“We want to be close to where the customers are and where the orders are coming from,” he said. “Having New Jersey in the middle of this Mid-Atlantic region creates a really cool opportunity to be here.”

Such as ones working with robotics.

Chris Heisig, the startup project manager, said the pod system helps employees do their jobs more efficiently and with less wear and tear on their bodies.

He joked that it’s like have a big library, but, instead of having to search for books, the bookshelves come to you.

“You’re not having to walk 10 miles or whatever that is a day,” he said. “You’ve actually got the work coming to you, so it’s a lot safer.

“It’s a lot easier for an associate to figure out. They don’t have to understand where to go. You don’t have to teach them how to navigate, it just comes to them.”

Having the pods filled randomly also makes sense, as it enables the operator to be able to bring numerous pods to an offload site, rather than specific ones for specific items.

These jobs may require more training, but Amazon is more than happy to provide it. And not just at the facility.

Company officials said the Career Choice program that is a part of the benefits package enables employees to have as much as 95 percent of their tuition paid if they go back to school for careers that are in high demand — even if those skills do not necessarily relate to their current job with the company.

Truth be told, he is thrilled the company is offering so many jobs. It will be the largest employer in the county when the facility opens.

All this in a building on an industrial site that has been vacant for nearly two decades.

“The impact of Amazon choosing us and coming here is immeasurable,” he said. “It’s not just the jobs it’s going to bring to this facility, but the ancillary jobs: restaurants, banks, car wash, everything.

Turning a corner: Family business expert Stewart sees some signs of hope and change after difficult year — in many ways

Vested interest: COVID’s challenges were particularly painful for family businesses — which, so often, treat all their employees like family

PSE&G’s 2.3M smart utility meters will be great for efficiency —...