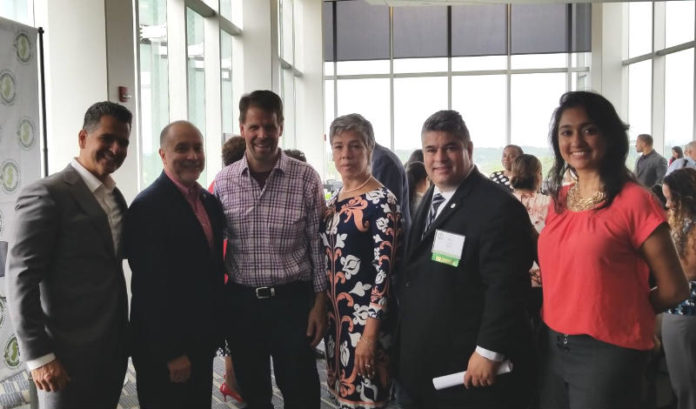 Francis Blanco recently was named a director in the office for women’s empowerment initiatives in the state’s Department of Women, a division of the Department of Children and Families.

Blanco, who served as chief of staff for former Trenton Mayor Eric Jackson, had plenty of good things to say on a panel on diversity and inclusion at the Statewide Hispanic Chamber of Commerce of New Jersey event held last Friday at Kean University.

ROI-NJ caught up to her afterward to get more of her thoughts.

ROI-NJ: You talked about how important it is for people of today’s older generations to make sure the younger generations understand the struggles older generations have faced in gaining acceptance and inclusion in the workplace. And you weren’t talking about millennials, but those who are still children. Why are you so passionate about this?

Francis Blanco: It’s critical because it’s about educating the next generation. They have to know what the issues are — and, if we don’t point that out to our children, how will they know? If it’s not understood that (inclusion is) part of a bigger equation, then how do we maintain our gains? Those of us who came before us made us aware of it. But, if we become comfortable and don’t teach the next generation, then the gains we made will go back. There has to be awareness.

I’ll give a perfect example: My grandson (is 11). We speak Spanish in the home, we eat Spanish food in the home, but, much to my embarrassment, one day he said, ‘I’m not Spanish.’ He felt that way because he’s not treated any differently in school. I was completely taken aback. For him, being Spanish meant you spoke Spanish all the time. I had to explain to him that Spanish is not a language, it’s a culture identity.

ROI: You talked about the idea of different cultural identities: How so many people feel all Latinos are the same because they all speak Spanish and are generally considered Latino without distinction, no matter where they are from. You talked about how few people who are not Latino appreciate the different cultures of the Spanish-speaking world. Why are these distinctions important — and important in the business world?

FB: We need to bring into light that, while we share a common language, we are different. We have different cultures and we have different experiences — even how we were colonized or not colonized. All of that impacts who we are today.

There is one language that unites us, but you are talking about — depending on how you categorized it — 22 to 24 different countries that all have a different history. Some may share some history, like Puerto Rico and Cuba and some countries in Central America, but we do have different perspectives.

That’s the diversity. It’s not just in appearance, it’s in the experiences and the perspective that you bring. That’s what we add to a business strategy.

ROI: The discussion today also focused on how to achieve diversity and inclusion by more than just creating employee resource groups, why is that?

If the faces are different, but you are not allowed to be who you are — and how you are different — than it doesn’t make a difference.

ROI: What would be the No. 1 thing you would say to an employer or supervisor who wants to understand diversity and inclusion, but just doesn’t fully understand it?

FB: I would say, don’t be afraid: Ask the question. We’re not going to be offended if you come to me and say: ‘I don’t understand. Help me.’ That’s the first step. Don’t be afraid. It’s not going to be easy, but I think that, if you find someone that is discussing diversity and is interesting, just approached them. As with all other areas, let not the fear stop you from asking the question.