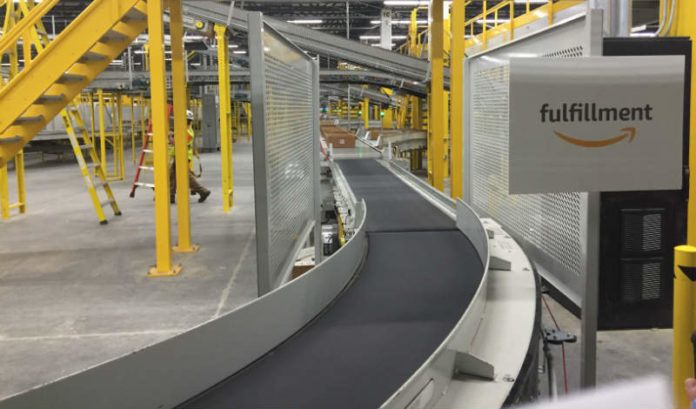 Raise your hand if you can find West Deptford on the map of New Jersey.

Now, raise your hand if can find someone outside of the state who can find West Deptford on a map.

Or anyone who has even heard of the Gloucester County community with approximately 20,000 residents spread out over 15 square miles.

When it comes to measuring the impact of the opening of Amazon’s latest New Jersey fulfillment center — its West Deptford location is scheduled to open Sept. 15 — there are plenty of numbers that can be used.

But, beyond the stats — beyond the fact that it will employ nearly 2,000 people in a facility that has nearly 1.7 million square feet of space when you total all of its floors — is a level of branding and awareness that can’t be bought.

“We’re hoping to hear other companies say, ‘We want to come to West Deptford because Amazon has decided it’s a great place to be,’” she said.

Simmons said the opening of the facility is not just a dream come true for the region in terms of jobs, but a perfect fit for what elected officials feel is the area’s greatest economic strength.

“A big part of what we do is warehousing, distribution and logistics,” she said. “New Jersey is a logistics state. In this part of the state, we have some of the largest industrial parks on the East Coast.”

The business plan has been percolating for some time. The site where Amazon built in West Deptford has been vacant for nearly two decades — since the Huntsman Corp. left around the turn of the century.

“We were hopeful to have a big influx of jobs like this that specialized in e-commerce and warehousing,” Simmons said.

While the areas around exits 7 and 8 on the New Jersey Turnpike have been growing because of this sector for some time, Simmons feels this facility will help the southern end of the state get a greater share.

“This gives a little bit more push to Exit 4,” she said.

The area, she said, is ready for more.

“We have had a significant investment in rail here,” she said. “We had federal funding to increase the capacity for freight several years ago.

“We also have the Port of Paulsboro, which is now is functioning with one berth, and has berths 2 and 3 coming on line in the next couple of years. And we’re looking to have a private port at the Repauno site a few years after that.

“With the governor and Legislature significantly increasing funding for roads and bridges and rails, we’re seeing our capacity grow.”

West Deptford Deputy Mayor James Mehaffey said the area can handle all this growth and more.

And, Mehaffey points out, the Amazon site is not expected to impact area traffic.

“We’re not going through residential sections,” he said.

That being said, both Simmons and Mehaffey feel the site’s biggest impact will take place in the nearby communities.

Such an influx of jobs will not only lower unemployment, but also crime and the potential for addiction issues. In return, it should help increase the local economy and the spirit of the town.

“Everybody wants to work; no one wants to be on unemployment,” Mehaffey said. “I think Amazon has a great business that can offer that to people in this area.

“It can help build self-esteem and self-worth.”

And that, in turn, may make other companies want to bring their employees to the area.

“When Amazon says, ‘This is where I want to locate,’ others will follow,” she said.

Mehaffey said that can only help put West Deptford on the map.

And once people find it, he feels they are going to like it.

“We have a lot to offer,” he said. “We’re not just industrial sites.

“We have a tremendous waterfront and other areas that are ready to grow.”

Giving Icahn the money would be best bet