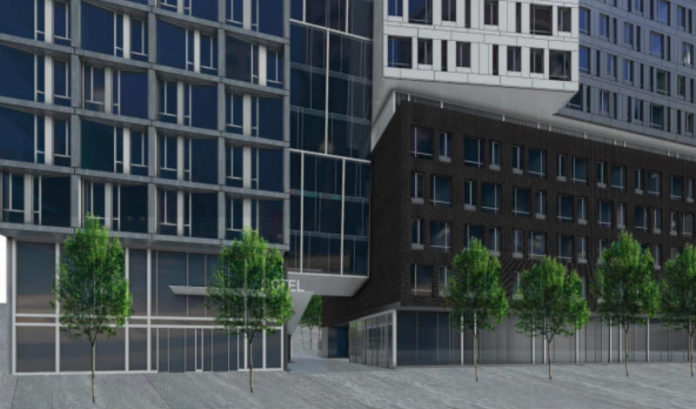 A 25-story, mixed-use facility that will serve as the anchor of a major redevelopment project in Journal Square is coming to Jersey City, the Jersey City Redevelopment Agency announced Wednesday.

The five-parcel lot, which sits on Newark Avenue and Cottage Avenue in Journal Square and had been previously transferred to the JCRA, will be purchased by Canbis LLC, for $8.7 million.

“This selection of Dream Hotel Group to operate a major mixed-use project in Journal Square represents a huge step forward for the neighborhood at the heart of our city, as well as our region as a whole,” he said in a statement.

“The plan brings with it an internationally known brand that will bring a dynamic energy to the area, as well as hotel rooms, residential units, and tons of retail space. I am excited by the selection of this proposal, and look forward to continuing to push Journal Square, and Jersey City, forward.”

Jersey City officials feel the tower will serve as a major transit-oriented development that links the Journal Square transit terminal with a growing local neighborhood. The project site incorporates not only the JCRA property, but also four additional lots directly adjacent that are currently owned by Canbis LLC.

Diana Jeffery, acting director of the JCRA, said the board feels Canbis is the right partner for the project.

“Our evaluation team was impressed by Canbis LLC’s innovative and thoughtful approach to their redevelopment plan in Journal Square,” she said in a statement.

“In addition, through this project, Dream Hotel Group proved their engagement and enthusiasm for Jersey City’s culture and have future plans to partner with local businesses and vendors to integrate the project with the surrounding community.”

The proposal selection was decided by the JCRA board at a meeting Tuesday night. The vote was 5-0.

Sales up at 99 Hudson in Jersey City