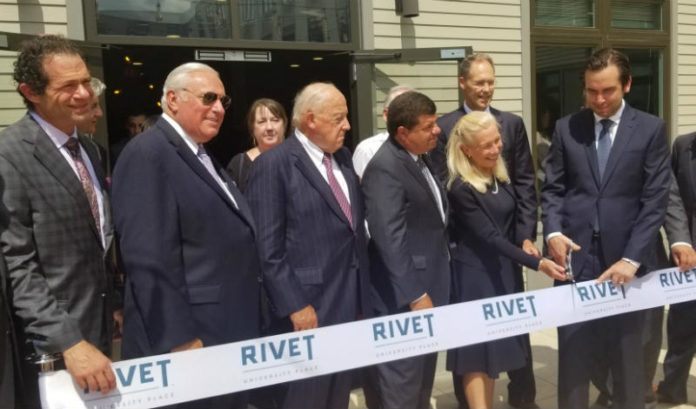 A new market-rate apartment in Jersey City’s Greenville neighborhood is signaling a new era away from the “Gold Coast” of the city.

RIVET, a 162-unit apartment complex on University Place Boulevard, next to New Jersey City University and on the university’s land, is going to have a significant economic impact, according to several speakers at the ribbon-cutting event Wednesday morning.

“University Place has, and will continue to create, 1,950 construction jobs, 1,080 permanent jobs in retail, service and other sectors. We are going to generate more than a half-billion dollars of economic activity, nearly $205 million in labor or other, and $19 million in state and local taxes,” said Strategic Development Group Chairman and CEO Anthony Bastardi. “We are going to generate a real estate income tax stream to Jersey City of $19 million on real estate that had not generated a nickel of income for the last two decades.” 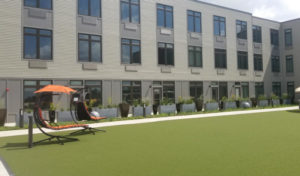 The project is one of several that will be built on several parcels of NJCU land, which include eight buildings, 1,000 luxury residential units and more than 120,000 square feet of retail, cafes, green space and a performing arts center — a key project championed by NJCU President Sue Henderson.

The city is gaining significant revenue from the project, as well as the college.

Henderson said Gov. Phil Murphy’s signing of new public-private partnership legislation has played a key role in the ability of the college to benefit.

“The way the P3 legislation is set up, we own the land and (the developers) are doing a 50-year ground lease. They pay us the ground lease every year, and we are taking the ground leases of all the projects and putting those together to pay the mortgage on the academic building,” she said. “The added benefit is the academic building is a performing arts center, which will be a place for these (tenants) to go because, not only will it be our students performing, but we’ll also bring in external acts. This will be a 350-seat venue.”

The Hanson father-and-son duo at The Hampshire Cos. also has hinted at a possible relationship for the school to have tenants in the building. Henderson said a conversation is ongoing to strike a deal for faculty to be able to live in the building, which could help attract more to the area.

Jersey City Mayor Steve Fulop said the project is just the latest project, and is balanced by more affordable housing also opening in the southern area of the city. 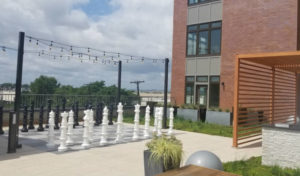 “This is one of our most important achievements in the last five years, is getting development away from the waterfront. We wanted to see Journal Square, we wanted to see on the West Side, we wanted to see the Bayfront move, and it move to the South Side,” Fulop said. “Some of the areas of Jersey City that were underappreciated for decades. And the city struggled with seeing that development away from downtown. When you cut the ribbon on buildings like this, you can see that the quality and commitment to other parts of Jersey City are the same as it is downtown.”

Fulop also told ROI-NJ, after the event, that focusing on the existing residents in the region is a priority.

“One of our primary objectives is making sure displacement doesn’t happen, so there’s a lot of inclusionary zoning happening and a lot of affordable housing happening,” he said. “One of our objectives five years ago was to see growth outside of downtown, and that first meant Journal Square and then Bergen-Lafayette, and the West Side, and we are just happy that it is coming to fruition.”

The road to reach here wasn’t easy, and took a tough political battle to approve the development as well as tax abatement programs to help incentivize developers.

Rolando Lavarro, city council president, said the waterfront is now developing on its own and doesn’t need the attention or tax incentives that other parts of the city do.

“We’re moving into these other parts of Jersey City have long been lacking investment and development opportunities,” he said. “This property generated zero dollars because it was state-owned.” 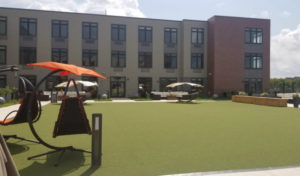 Jon Hanson, founder and chairman of Hampshire, said the 50 units that have already been leased in the past two-and-a-half months are proof that there is interest — especially from New Jersey natives who are working in New York City.

He explained why the building is, in fact, able to attract leases, thought it is away from the bustling downtown and New York City-facing waterfront area.

“The fact that the school is here is a magnet, and it’s a short walk to the light rail. It’s about a 10-minute walk,” Hanson said. “(Also), from our research, people who have grown up and have been raised here in Jersey City gravitate toward the West Side. So, when you look at the cross-section of people who are renting here, you’ll see Jersey City, high percentage, and the surrounding area. We compete with Bayonne, Harrison and the West Side of Jersey City more than we do with the so-called ‘Gold Coast.’ Most people coming here are commuting to New York.”

The Hampshire Cos. and Claremont Properties, along with Circle Squared Alternative Investments, are responsible for the project.