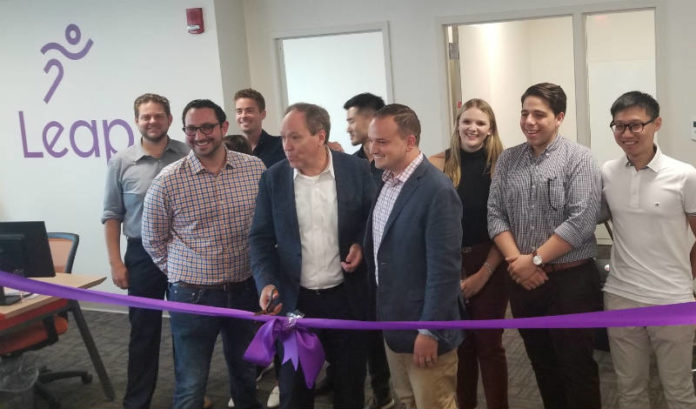 Richard O’Connell likes to call his company a combination of fintech, insurance tech and real estate tech all rolled into one.

Young renters, he said, are calling Leap a unique way to get an apartment when they have been denied by landlords.

The New Jersey Economic Development Authority is calling the company a poster child for its Angel Investor tax credit.

The business plan is simple: Anyone needing a co-signer for any number of reasons (ranging from age to credit history to an inability to pay a hefty deposit) can turn to Leap.

O’Connell, the founder and CEO, said Leap is targeted to college students, international students, young professionals, people with thin credit files, including those who are older and have had some trouble.

If approved, and for the fee of one half of one month’s rent, Leap will serve as the cosigner, providing insurance (and assurance) to landlords for one year.

The company, which launched in June, celebrated its opening in Jersey City’s Newport neighborhood at a ribbon-cutting Wednesday.

O’Connell said the concept has been a big hit with potential tenants — but one he is still helping landlords understand.

“This idea of having an institutional cosigner, versus a traditional mom and pop, is new,” he said. “When landlords first hear, (they are) confused.

“The real estate industry is not really high tech; we are dragging landlords kicking and screaming into the 21st century.”

The 3-month-old company is one of the latest to benefit from the EDA’s Angel Investor tax credit, according to Kathleen Coviello, the authority’s vice president who oversees the technology and life science division.

The company raised $2 million from a dozen investors in May and was approved for underwriting insurance in June when it launched. The staff is currently up to 11, including one underwriter. There were also three interns, including one from Stevens Institute of Technology.

The company has been able to work with landlords in Newark, Harrison, Jersey City and Hoboken since launching. It is being advertised on social media and PATH trains.

It also has benefited from word-of-mouth and social media referrals, as well as targeted advertising such as on PATH trains.

O’Connell said he has been surprised by the growing presence the company has on WeChat, the Chinese social media and messaging app.

“There are lots of Chinese students coming for graduate degrees at Stevens, (New York University) and Columbia (University),” he said.

If they were to search for apartments the traditional way, because they usually don’t have a credit history or cosigner, they are likely to have to pay six to 12 months’ rent as a deposit, O’Connell said.

The traffic, he said, is coming in at a steady pace.

This is the type of growth that the EDA has been trying to support with the Angel Investor tax credit, according to Coviello.

Especially because it takes the risk of the taxpayers of New Jersey.

“So, there is no loss for New Jersey and we are incentivizing folks, smart folks with investment track records, to take a look at these young companies.”

That includes, for example, a former AT&T president, who is one of the investors in Leap.

To-date, the EDA has seen $39 million in investments in the first half of the year.

In addition to getting a better idea of how much investment is occurring in the state, the EDA is also able to encourage the companies to get on the radar of venture capital firms, according to Coviello.

“One of the things (O’Connell) should do now is create a Crunchbase profile,” she said. “Because everyone goes onto Crunchbase to see what new companies are getting started.

“If you talk to VCs, they all troll Crunchbase. They want to know who is investing in what kind of deals. It’s giving us an eye into how many people are investing in New Jersey companies under the radar.”

NJPRF gets $4.5M to provide to N.J.’s vulnerable residents