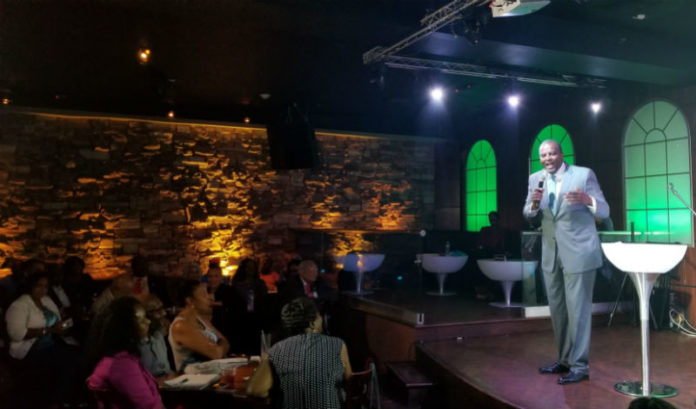 The appointment of a diverse cabinet, along with the recent hiring of a chief diversity officer for the state by Gov. Phil Murphy, has energized some minority business advocates.

Nowhere was that clearer than at a networking event for the African American Chamber of Commerce of New Jersey on Wednesday evening in Paterson. The event focused on bringing elected officials and businesses together to boost awareness about the opportunities for bidding on government contracts.

“It is a new day,” Hester Agudosi, New Jersey’s new chief diversity officer, said to a crowd of more than 50.

She repeated the phrase to applause, echoes and affirmations.

“Alright,” one person shouted from the crowd.

Several chose to simply express with a loud “Mm-hmm.”

The crowd of more than 50 drew a mix of top-level executives and small business owners, as well as elected officials, including U.S. Rep. Donald Payne Jr. (D-10th Dist.), Assemblywoman Shavonda Sumter (D-Paterson) and various city council members from throughout the state.

Meetings such as these are more important than ever, chamber President John Harmon said.

Not enough business owners know how to qualify for government contracts, nor do they know where to look, he said.

Harmon has been working to create better opportunities with legislators for the African-American community. He focuses on getting government and corporate service contracts more equally distributed among minority businesses.

“This is a great time in the state of New Jersey,” he said. “I know a lot of the folks are talking about what’s going on in Washington. I think that’s a legitimate conversation.

“But there’s a lot going on in your neighborhood that you don’t know nothing about. A lot.”

Harmon and Agudosi stressed the importance of finding out about local opportunities and attending municipal council and freeholder meetings on a regular basis.

Part of the reason, Agudosi said, is because the contracts are cumbersome and full of legalese. Her intention, in her new role in the state, is to figure out how to make it easier.

In a country where 49 percent of people are employed by small and midsized businesses, that’s a necessary step, she said.

Agudosi recalled her time at the Department of Environmental Protection, where a $1 billion trust fund existed to pay for infrastructure activity.

That’s $1 billion that most minority businesses do not have access to or know about, she said.

“I am successful in the job that I do when you have contracts,” she said. “Bottom line.”

“We’re still not there yet when it comes to the wealth gap,” she said. “This is an opportunity where we can close that wealth gap and do it for the good of not only their families but also their communities.”

Payne said that, although there are a greater number of African-American elected officials in and from the state, there is still a long way to go.

“It just has to do with the experience of the African-Americans in this country,” he said. “It’s just another part of the disenfranchisement of a certain sector of people. Not being full-fledged citizens, understanding the system, being a part of the overall system, that is something that has been coming in scrapes and scuffs over a period of time.

“I think it’s a concept that’s evolving. We are only one or two generations removed from being allowed to vote, so we’ve come a long way.”

Rick Thigpen, vice president of state governmental affairs for Public Service Enterprise Group, said there are many untapped opportunities in the African-American community.

“There are absolutely unfulfilled possibilities,” he said. “Success in the African-American business community will lead to greater prosperity.”

It won’t be easy, Thigpen said.

“So, the challenge is not to point fingers, but, really, to find a way to understand that prosperity in the African-American community is good for New Jersey and we should do the things we can to see it happen.”

“You have to step out of Trenton and off the Turnpike and get into these municipalities, because these are working people,” she said.

“They don’t necessarily have the time to go to Trenton. Let’s make the process a lot less complicated.”