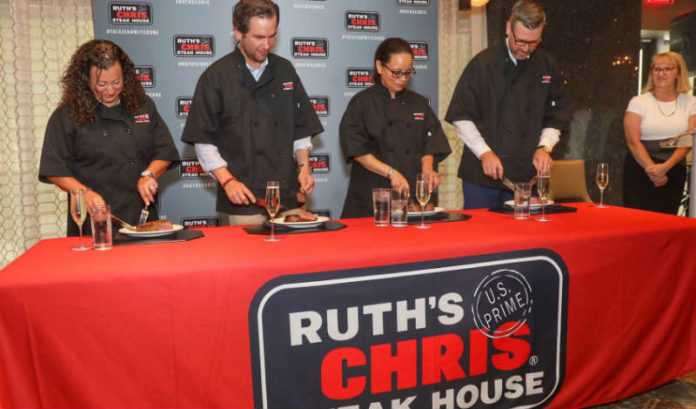 The heads of Ruth’s Chris Steak House assured everyone in attendance Monday at the opening of the company’s Jersey City location — its fifth in New Jersey — that the restaurant will have everything the noted chain is famous for, including steaks that sizzle as they are brought to the table.

But Rik Jenkins, vice president of operations for the company, said the Jersey City location will be a bit different from others, as the company is using it to introduce a more modern look.

“We are a local collection of steak houses,” he said. “The one in Boca Raton does not have to look like the one in Jersey City. And it doesn’t.

“We feel this is a good restaurant for Jersey City and shows how we are trying to remain fresh and relevant.”

Jenkins said the restaurant, at 11,750 square feet and with the ability to serve more than 400, is bigger than the traditional Ruth’s Chris layout.

Other updates, he said, include a cleaner, more open look in the main dining room, plus a larger bar area.

“We feel there’s a shift going into how diners use the bar nowadays,” he said.

The shift in emphasis, Jenkins said, is intentional.

“We’ve been in (business) 50-plus years and we want to be in business for 50 more years,” he said. “If all we did was dark mahogany wood, we probably would still be appealing to the baby boomers, but there are Gen-Xers coming down the line and then the millennials.

“We’re trying to find an opportunity where we can be true to our roots but move into the 21st century.”

Officials said the restaurant will continue the flair that hope to be known by.

Monday was another example. Instead of a traditional ribbon-cutting, the restaurant had a “steak-cutting” in front of local dignitaries.

Jersey City Mayor Steve Fulop said the city is delighted to have the restaurant come to town and that its location — 499 Washington St. — puts it in a position to attract both business and residential customers.

“It’s a terrific brand opening up a massive restaurant, employing a lot of Jersey City residents,” he said. “It’s a great thing for the city and just speaks to the continued progress happening here — and shows this is an attractive place to do business.”

The restaurant has plans to target both kinds of customers with specialty rooms inside.

There is a “boardroom” area for private parties, where up to 18 people can meet for a business dinner. In addition, the restaurant has a larger private area that can accommodate up to 82 people — or be divided into thirds.

“We feel there’s a great opportunity to take advantage of all the people who walk by here on a daily basis,” Jenkins said.

The restaurant opens to the public Monday.

It will be open daily at 4 p.m. (for the bar) and 5 p.m. (for dinner). As of now, it does not have a lunch option, but restaurant officials say that is likely to come in the future.

The Jersey City location marks the brand’s second location in Hudson County. It also has a location in Weehawken’s Lincoln Harbor. Ruth’s Chris also has locations in Atlantic City, Princeton and Parsippany.

It plans to open a sixth New Jersey location in Paramus this fall.