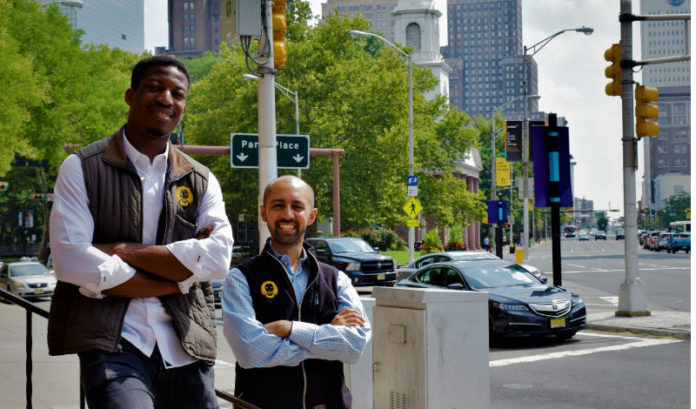 While the federal government continues to establish the regulations that will define Opportunity Zone funds, companies and investors already have started a number of funds that are targeted to areas of New Jersey.

Many of the biggest investment companies already have jumped into the game. But there are smaller funds as well.

Ojo and Kohli, spent time on the state’s Gold Coast and in New York City after graduating from Seton Hall University in 2011, working for Goldman Sachs (Ojo) and JP Morgan (Kohli).

They returned to Essex County to start an Opportunity Fund in Newark because they see it as great vehicle to help boost small businesses.

Kohli agreed, adding that the Opportunity Act has been a gift to the real estate community.

“The act is really geared toward real estate investors,” he said. “We just didn’t find any of the initial properties to be attractive. What we found was that no one is still investing in small business. Which is the actual intent of both (U.S. Sens.) Cory Booker (D-NJ) and Tim Scott (R-SC), to create jobs, to create an impact.

“We find its most impactful by investing and building small businesses in these regions, and then hiring and training and developing local employees from these regions. Given that we are minorities, born and raised in New Jersey, and we’re a certified minority-owned business, we have a direct link to all the minorities that are in urban communities such as Newark. Newark happens to be a significant Opportunity Zone in the state and in the country.”

Now, the two are working out of a room in the First Baptist Peddie Memorial Church in Newark.

Golden Door already has a portfolio of small businesses they are investing in or interested in, and they have opened up a fund that will focus on greater investment in the area. And the clock is ticking until the tax break on capital gains begins in 2019.

Being a smaller operation actually has its advantages, Kohli said.

He explained that there are only seven years, as per language in the Opportunity Act, within which investors can take advantage of a 15 percent tax abatement on capital gains.

“So, if investors don’t make the investment next year, in 2019, it’s very difficult for them to get that,” he said. “They won’t be able to get the 15 percent bump. That may be a 10 percent, which is a big difference.

“So, the big money won’t be able to make a decision fast enough and if you have $1 million-plus in assets, which will actually be able to bring in billions of dollars, it will be very challenging to deploy that in one year. So, the longer people wait to take action and to invest makes it less attractive.”

Because they aren’t part of a large corporate structure, Ojo and Kohli feel Golden Door Asset Management will be able to easily pivot regardless of which way the U.S. Treasury Department writes the regulations.

In addition, Kohli said smaller concentrated investments have the potential to have more impact.

“The problem is that Opportunity Funds are required to invest 90 percent of their assets in an Opportunity Zone,” he said. “So, most mega funds and the $100 million-plus in assets range have a size problem, because investing 90 plus million dollars in an area that’s considered dilapidated or underutilized is a problem.

“Let’s say a $50 million-plus business is in an area that has low income or low standard of living. It’s possible the business is not really creating the impact in the city.”

“It’s difficult to find businesses that are good investments in that size range,” he said. “We’re targeting business under $25 million. They are a dime a dozen, most of them across the country. There are thousands of them in New Jersey. And you can easily make a significant impact on these businesses.

“We’re trying to (invest in) labor intensive businesses where we plan to train and develop employees. There are state or local government incentives provided to do that training. And it’s easier for us to take a 50-person business and make it into a 100-person business over five years than to try to take a 2,500-person job and make it 5,000.

“We run like owner-operators, so we’re not running a really large investment company. We’re running like a real small business.”

Which is why the two-person operation is ideal.

“So, they’re good investments to begin with and they can have an impact with the Opportunity Act. It’s the first time we could roll over capital gains from private to public stock, as opposed to just real estate. That’s the first time that’s never happened in American history. So that’s something we want to take advantage of. Given our niche and small business and given our niche in the city and our relationships, I think it’s almost a no-brainer.”

Golden Door has found its niche in the staffing and outsourcing industry, with a current deal in the facilities maintenance business. All the businesses are what Kohli described as non-core businesses supporting major companies and corporations.

The two co-founders are interested in Newark because of its potential for growth, according to Ojo.

“As we know, Senator Booker is very, very high on Newark, the need of advancement of Newark and the community, which is great,” he said. “When we look at what his general consensus was for having this act, it was really based on, ‘Hey, we have people out here that are suffering and they’re struggling. The economy doesn’t make sense for them. Overall, the economy is doing pretty well. How do we include those people in there?’

“Well, most people need jobs. People need jobs that have given them fair wages and some sort of benefits and maybe some autonomy on professional growth, so they can elevate themselves through that job. When you have a good job, you most likely will have some type of benefits there and take care of yourself health wise and take care of your families if you have them. If you have that, you’ll actually be more of a contributor to your community.”

Fulop understands today’s Hudson County chair vote is as much about...