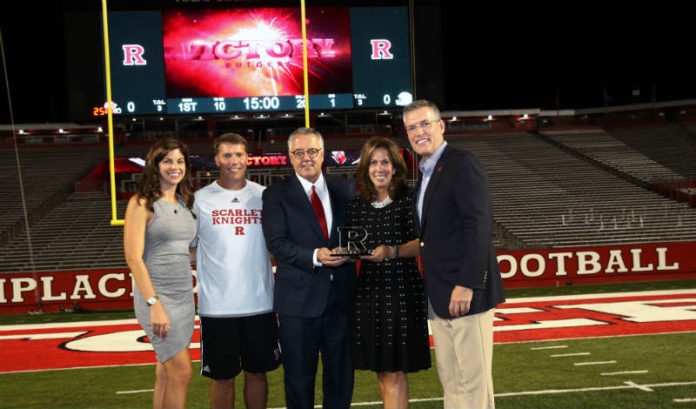 Rutgers Athletics received a $4 million gift from Greg Brown, former chair of the university’s board of governors, and his wife, Anna Brown, granddaughter of the founders of the Rutgers University Psychological Clinic.

The gift will help fund the renovation of the football locker room, the university said. It was announced just before the Browns accepted the 1869 Legacy Award, the highest honor presented at this week’s 50-Yard Line Celebration, held at the newly renamed HighPoint.com Stadium.

“What makes (the award) special is that we remain true to who we are,” Greg Brown said in accepting the award. “When we decide to do something, we’re all in. We have the right people in charge here to make it happen. We’re passionate about the cause and we believe in the people. It’s in that spirit that we rally around you. We subscribe to the philosophy that, when it’s all said and done, it’s about what you’ve given away and the impact you make.”

The gift will not only support the Hale Center, it will bring the university’s Rutgers Big Ten Build Campaign to a total of $99 million in funds received.

“Greg and Anna Brown flipped the script for this evening with a surprise commitment, and we vow to keep the momentum rolling for our Scarlet Knights,” Director of Athletics Patrick Hobbs said in a statement. “We are incredibly grateful for their family’s leadership. This is a game-changer for our program.”

Greg Brown is a 1982 graduate of Rutgers’ Livingston College. He is chairman and CEO of Motorola Solutions and remains a member of the university’s board of governors. The Brown Football Recruiting Pavilion & Welcome Center is named in his honor after a $2.5 million pledge in 2009, and the Gregory Q. Brown Chair in Cell Biology & Neuroscience was named for him after a $1.5 million gift in his honor by Motorola.

The football team kicks off its 2018 season at noon Saturday against Texas State.

Four NJIT students named Goldwater Scholars — one of the top...

Murphy insists schools are one of the safest places to be