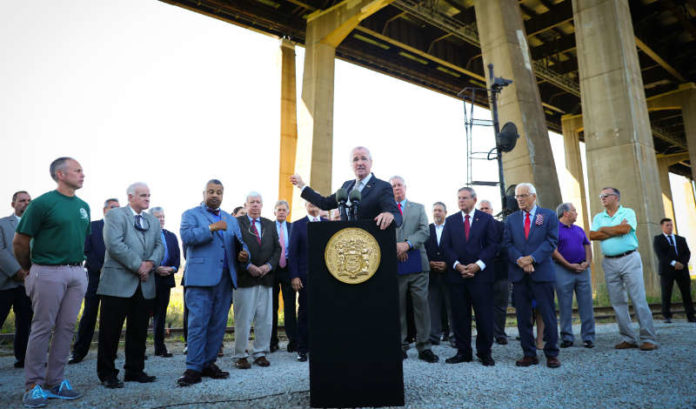 A coalition of politicians and business leaders stood under a bridge in Secaucus to rally support for the Gateway Tunnel project — which currently is being stonewalled by a New York native who happens to be President of the United States, Donald Trump.

The region’s labor leaders, county freeholders and mayors were also in the mix.

And they came talking tough.

“It should be clear to the president now that Gateway will be built with or without his help,” Menendez said.

But, for all their bluster, one truth about the project remains — and always will: The tunnel cannot be built without significant federal funding.

Tuesday morning’s event was just another opportunity for leaders on both sides of the tunnel to once again stress its importance to the region — and the country.

The pitch included points that have been made consistently over the past two years, as stakeholders have lobbied the federal government:

Despite this, there has been little movement on the project.

The Trump administration reversed the priority rating of the tunnel and bridge, from a top federal transit priority to one that sits near the bottom. And it currently is holding up environmental permitting for the project.

Menendez and Pascrell explained that the project has managed to get more than $540 million in federal appropriations, despite pushback and a veto threat from Trump, and continues to have bipartisan support in Congress.

Pascrell said there’s any reason for that.

“Everyone here today, from lawmakers to those in the business community,” he said. “They know that the Gateway and the Portal Bridge projects are decisive to the future of our region.

“It is important to the stability of our state and rail traffic up and down the Eastern seaboard.”

Menendez touted his own push for federal funding and local transportation projects throughout his career, adding that they were of key importance to a region like New Jersey, which plays a key role in the Northwest corridor that connects Boston to Washington, D.C.

“We’ve always worked to deliver for New Jersey’s communities,” he said. “That’s because the question of whether we invest in our infrastructure isn’t abstract, it translates into real benefits and real consequences for the people of New Jersey.

“It dictates whether businesses can bring their goods to market and whether they choose to locate in New Jersey at all.”

Zaro reinforced the message of the politicians, adding that a disruption of the lines would have significant impact on the economies and labor force of both states on either side of the Hudson River.

“Fully 13 percent of the New York City labor pool is forced to play transit roulette,” he said. “Betting daily upon whether two ancient, slender tunnels will get them to work on time or back home to their families in the evening.

“And if companies in New York can’t access a workforce from New Jersey, they, too, will have to consider relocation, dealing a potentially devastating blow to our residential and commercial real estate values.”

Menendez said the Senate has passed series of smaller budget packages that include the Gateway project and language in the legislation he believes will get the project moving forward.

“With 200,000 daily passenger trips, riders from New Jersey, New York and up and down the Northeast Corridor, and 10 percent of the nation’s economy dependent on a reliable and resilient rail link to New York City, there is simply no room and no excuse for failure,” they said. “We’ve waited too long and allowed too many riders to suffer far too frequent delays and lost productivity. We must finally replace the deteriorating century old, one-track-in, one-track-out tunnel system with modern transportation infrastructure.

“We are grateful for the unwavering commitment of Govs. Murphy and (New York’s Andrew) Cuomo and of all of our elected delegations, Democratic and Republican, and will continue to do everything we can to move the Gateway projects forward and see them completed.”