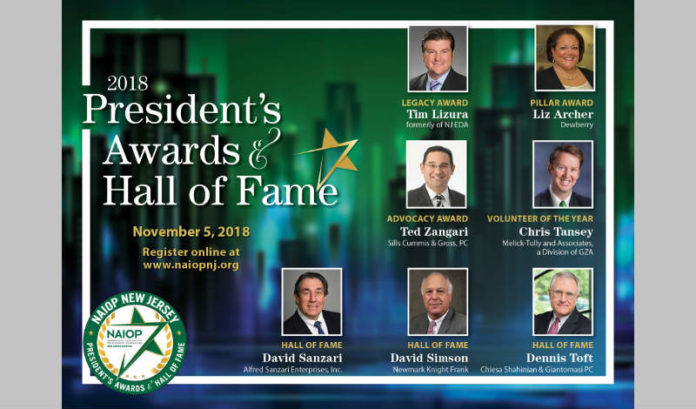 Tim Lizura, a longtime executive with the New Jersey Economic Development Authority, will be honored with the NAIOP New Jersey Legacy Award at the Annual President’s Awards and Hall of Fame Dinner later this fall.

Lizura, the former president and chief operating officer of the EDA, is among those being honored for the vital roles they play in supporting the industry through their work for and commitment to the commercial real estate development association.

Dewberry’s Liz Archer will receive the Pillar Award, which recognizes members who set an extraordinary example of involvement.

Ted Zangari of Sills Cummis & Gross P.C. will be presented with the Advocacy Award for outstanding work in public policy.

Chris Tansey of Melick-Tully and Associates, a division of GZA Environmental, will be recognized as Volunteer of the Year.

“What is so special about this evening is being able to show NAIOP’s appreciation to those of our members who have given so generously of their time, talent and resources without asking for anything in return,” said CEO Michael McGuinness. “It’s our way of thanking and recognizing them for their contributions over the years.”

The event will be held at the Teaneck Marriott at Glenpointe, with networking and cocktails at 4:30 p.m. followed by dinner and the awards presentation at 5:45 p.m.