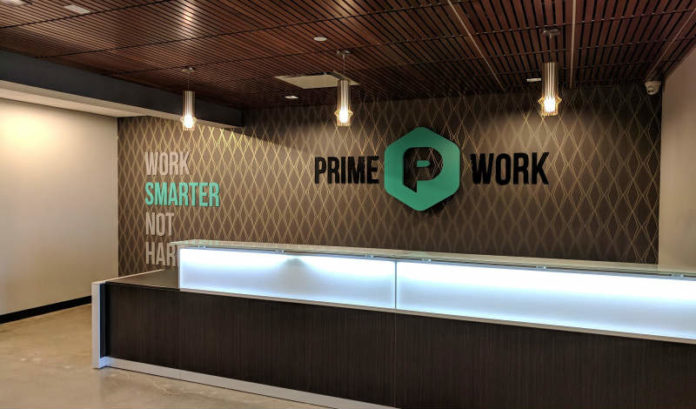 PrimeWork — or, what Avi Orlansky said he hopes will become the premier shared workspace of New Jersey — opened its first location in the state Tuesday in Somerset.

That’s right, a co-working space in the suburbs.

Orlansky said the trend to work in urban areas is not for everyone. He said some people are unwilling or unable to travel into the city for work find suburban offices much more preferable.

“We wanted to focus on suburban areas outside of the city, because, while most of the larger coworking spaces you have heard of are located in more urban environments, they also are often costlier,” he said.

“If we can provide the same level of services and amenities closer to home at a reasonable price, that’s a no-brainer.”

Orlansky said PrimeWork will offer short-term, all-inclusive workspace solutions for growing businesses, including amenities such as Wi-Fi, conference space, parking, printer and mail services, and a fully-stocked kitchen, among other things.

An unlimited pass for the coworking space at the 28,000-square-foot location on Franklin Square Drive in Somerset will cost approximately $250 per month, while a private office may cost $1,500 per month.

Orlansky, the founder and CEO of the company, said New Jersey is ready for this type of space.

“Today, there are more entrepreneurs than ever before, and New Jersey can become a huge hub for startups if we were to just provide the right space and support for them,” he said.

“We feel Somerset is the perfect place to launch our concept.”

And it’s just a start of what Orlanksy hopes will be more than a dozen locations in the state.

In the coming weeks, he will open locations in Jersey City (600 Pavonia Ave.) and Parsippany (199 Pomeroy Road) as well as one in Brooklyn.

The concept for PrimeWork came to Orlansky when he was working as the chief operating officer for RJ Brands, a manufacturer of small kitchen appliances and housewares in Mahwah.

The company, he said, needed to expand.

“We found the perfect office space for the right price in the right location,” he said. “The one downside was that it was double the size of what we needed.

“I said, since everything is perfect, I know what we can do with it.”

Orlansky and his team decided to build out the spare office space to create a rentable co-working environment with which to offset the costs of rent.

“Within two months, we were booked solid,” Orlansky said. “People constantly were asking when we were going to open more spaces.”

Orlansky was bit by the entrepreneurial bug, he said.

“I always had a fascination with business in general, always apt to talk with people about their companies and how they made them possible,” he said. “I also was enamored with the idea of building something from scratch.”

Orlansky took the chance in May 2017 when he left his job and created the concept for his co-working company.

One year later, he has hired a team of 10, has secured investors and has built the brand to where he believes it will be fast successful.

“After building out my first space, I realized that, if you want to do this properly, you need to be able to invest not only money, but also time, and scale quickly,” Orlansky said.

Orlansky, who has a background in marketing and management, also intends to utilize PrimeWork to help build the businesses of its tenants.

“By understanding their goals and offering our expertise wherever warranted, as well as by securing speakers and offering classes for current and prospective tenants, we not only will differentiate ourselves in the market, but also create partners in that way,” he said. “If they are building their businesses, so will we, too, grow.”

Orlansky said he hopes to build at least 15 locations in New Jersey within five years before replicating the PrimeWork model in suburbs elsewhere, such as outside of Los Angeles or Chicago.

For now, though, he said he is entirely focused on New Jersey.

“I want PrimeWork to become the premier co-working company in this state, both in name recognition and in its number of locations,” he said.