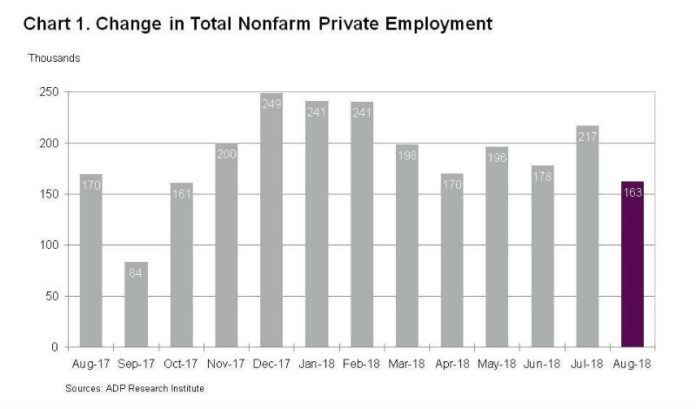 Private-sector employment grew by more than 160,000 jobs in August, according to Roseland-based ADP.

The payroll and human resources company said in its monthly ADP National Employment Report that the number of jobs grew by 163,000 positions from July to August.

“Although we saw a small slowdown in job growth, the market remains incredibly dynamic,” Ahu Yildirmaz, vice president and co-head of the ADP Research Institute, said. “Midsized businesses continue to be the engine of growth, adding nearly 70 percent of all jobs this month, and remain resiliant in the current economic climate.”

Mark Zandi, chief economist of Moody’s Analytics, said, “The job market is hot. Employers are aggressively competing to hold onto their existing workers and to find new ones. Small businesses are struggling the most in this competition, as they increasingly can’t fill open positions.”

Among the Top 10 sectors surveyed by ADP, those in service-providing industries led the way, adding 139,000 jobs compared with 24,000 in the goods-producing sector.

Under the service sector, professional and business services added the most, reporting an additional 38,000 new jobs, while education and health services added 31,000 and leisure and hospitality added 25,000.

Under the goods sector, manufacturing jobs added the most, reporting an additional 19,000 new positions, while construction added 5,000 jobs.

The only sector to lose workers was natural resources and mining, down 1,000 jobs for the month.