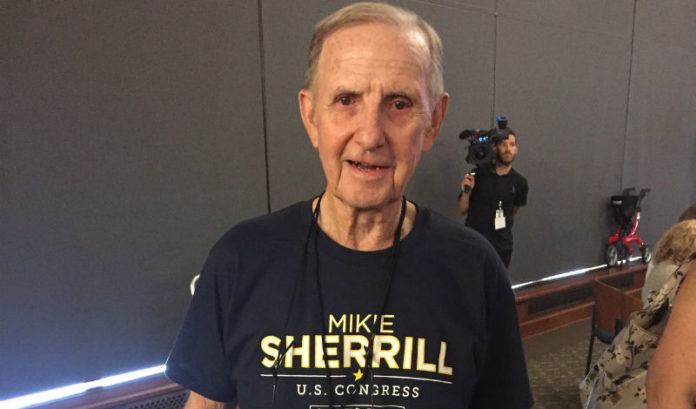 Don Lynch is proud of his humble upbringing. He views it as a badge of honor.

“I grow up at the end of a dirt road,” he said. “My mother cooked on a wood stove. We had chickens in the yard and we ate them when we needed to eat.

He’s 82 now, long since retired as a financial manager, and, for the first time in his life, he’s politically active.

Sherrill, a Democrat, hosted a kickoff rally in her race to win the 11th District congressional seat that is being vacated by U.S. Rep. Rodney Frelinghuysen (R-N.J.).

So far, the political newcomer appears to have a slight lead over Republican candidate Jay Webber in a district the Democrats have identified as one they can flip in their efforts to take back the House of Representatives.

Her campaign brought in some heavy hitters for the occasion Wednesday at Montclair State University, including state Democratic Party Chair John Currie, Gov. Phil Murphy and former Vice President Joe Biden, each of whom spoke in front of an enthusiastic crowd of approximately 1,000 — mostly college students.

Sherrill’s success, however, may depend on flipping more voters such as Lynch.

Lynch, of Kinnelon, said already has signed on as a volunteer.

He feels Sherrill has the secret ingredient for success: She’s a woman.

“I believe that there’s no change unless something changes in what I would call the antecedents,” he said. “Change those and then the outcome changes.

“Until women become a significant percentage of the governing body at every level, nothing will change.”

Lynch is happy that Sherrill does not have a traditional political background. He said the U.S. needs more of that.

“That’s the history of the country,” he said. “People used to leave the farms to run the government. Look at Abraham Lincoln. He taught himself to read and write and learned law by reading law. That’s what it should be all about.”

Of course, in the present day, Lynch wants those new politicians to be women.

He said if there’s one thing he has learned in his lifetime, it’s that women get the job done.

“The men on the other side of the aisle absolutely need the women to join with them to find compromise or to move in a different direction,” he said.

“I just think women are used to talking things over. It’s not, ‘Who’s the biggest guy in the room?’ They get together and they settle things. We need more of that.

“I’d rather work with women than with men anytime, because then we’ll get something done.”