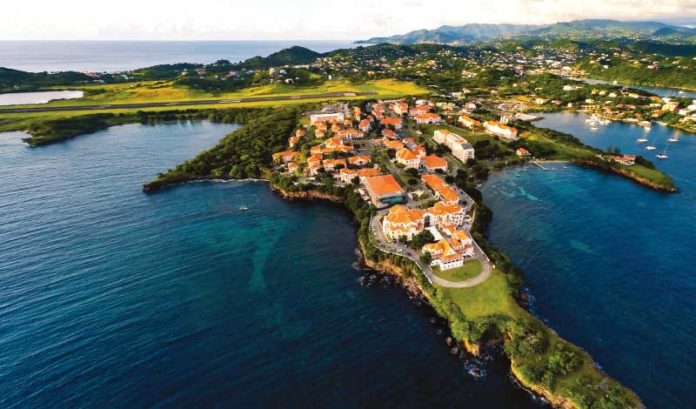 Out in the West Indies is an island country historically known for its nutmeg plantations: the “Spice Island,” Grenada.

Back in New Jersey, it’s known in the higher education landscape for the medical school it houses. It’s the largest by class size in the world, and it’s attracting more Garden State students than ever.

St. George’s University in Grenada is doing that by forming partnerships with local universities that put students on a journey to the resort destination-based school. It just established one such partnership with Felician University, a collaboration allowing students applying to the four-year institution to also receive early admission to the medical or veterinary schools at St. George’s.

George Abaunza, a dean at Felician, said the private university began discussing the potential of a partnership with St. George’s two years ago. Those conversations led to a basic agreement that the school’s biology students could be put on a pathway to admission into the Caribbean campus for two years of medical study before they undertake another two years of clinical training at an affilatiated hospital.

“Seeing an interest in that on the part of our students, we wanted to allow incoming freshmen to have a more sure sense of their future by in essence already being admitted to the school before they satisfied requirements,” he said. “So, that’s what we’re doing now. As you can imagine, that alleviates a lot of concern among students, so they can focus on doing well in classes.”

Abaunza said Felician students were already choosing to attend St. George’s in increasing numbers. He expects more to follow under this new program, which guarantees participating students a seat at St. George’s if they fulfill certain requirements.

In cementing the collaboration between these two far-off campuses, Felician joins just over 20 academic institutions in this country that have decided to pair up with St. George’s. And a significant portion of those partnered institutions are in the Garden State.

Included in that roster are Fairleigh Dickinson University, Monmouth University, the College of Saint Elizabeth and even Rutgers University, which, despite having its own medical school, has seats set aside at St. George’s for veterinary students.

In April, Essex County College in Newark joined the list. Preliminary discussions are underway about a partnership with Georgian Court University, as well.

These may not be the most high-profile partnerships in the Caribbean college’s repertoire, considering that it brings in students from all over the world. Regardless, they are held in high regard by the school’s leaders, such as Dr. Fred Jacobs, an executive vice president of the school and also a New Jersey native.

“Building relationships with undergraduate educators is very valuable to us, so we’re anxious to do it,” Jacobs said. “It gives us a bonding experience with those that are thought leaders in higher education. It also gives us first crack at a high-quality admissions group from (New Jersey).”

Jacobs added that Garden State colleges have seen the value in it, too.

“It benefits the undergrad institution because they can use this as a recruitment tool,” he said. “Students don’t have to worry about a medical school acceptance — and there are no strings attached if they get into another school they’d rather go to; they can go there just as easily.”

There’s a perk in forming a partnership network for St. George’s in the basic fact that, when the school is brought up to students, it may not be the first time they have heard of it (or the place it’s located, which Jacobs said is often mixed up with Granada, a city in southern Spain).

To add to that: There’s a perception challenge the school is overcoming. Higher education in the Caribbean has been lamented in the media for falling short of its potential.

Felician’s Abaunza admits that sentiment is sometimes heard in higher education circles. But he believes there’s a good reason to trust in the reputation of St. George’s.

“While there are some that don’t have as good a reputation, St. George’s definitely does,” Abaunza said. “This program has existed for about four decades. So, we’re excited about the opportunity this partnership with a longstanding medical school presents to incoming students.”

Jacobs said the success of students who attend the school speaks for itself. Graduates have a pass rate of 96 percent on the United States Medical Licensing Examination. The U.S. Department of Education gave its blessing to the program by judging its curriculum to be comparable to the country’s medical schools, according to Jacobs.

“And, if you look at members of the faculty at any medical school or hospital in the state, you’ll find people who are graduates of St. George’s,” Jacobs said. “That doesn’t happen by accident. It’s a result of decades of hard work.”

Jacobs, besides being a big believer in the St. George’s faculty, is a well-established name in the New Jersey health care scene. He had a four-decade career at Saint Barnabas Medical Center and was a state health commissioner under former Gov. Richard Codey and former Gov. Jon Corzine.

Late in his career, the New Jersey resident has found a home working on behalf of St. George’s in facilitating its local partnerships.

And it’s busy work; the Caribbean campus is already on the lookout for more connections to the Garden State.

“We’re anxious for more of these partnerships, so that we’re able to continue bringing in high quality students and educating them (so they can) fill needed positions,” he said. “And this could be important for New Jersey, too, given that the state has a need for more doctors.”

St. George’s University put nearly 1,000 graduates into residency positions last year, more than any other medical school. Some of those future doctors end up in the more than 15 affiliated hospitals in New Jersey.

“We make a substantial contribution to the workforce in New Jersey, the country and the world, for that matter,” Jacobs said.

St. George’s University is a big part of the economy in Grenada. And the school’s diversity makes it like Geneva.

“It’s like a mini-United Nations,” said Dr. Fred Jacobs, an executive vice president at the school. “People come from all over the world. Thirty percent of the class is international.”

That also means the university is plugged into global trends in health care, such as the United Kingdom’s recent dearth of doctors due to the Brexit decision, Jacobs said.

“Many of them came to U.K. to train and live, but are now are moving back to France, Germany and other parts of Europe,” he said. “As a result, there is a growing shortage of primary care doctors in the U.K., as there is here.”