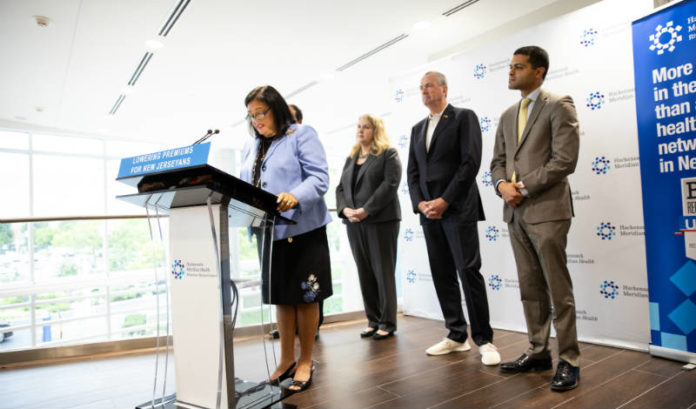 In the absence of federal support, the New Jersey Legislature and Gov. Phil Murphy have actively pursued policies for the state that should bring stability to the health insurance marketplace.

The governor held a news conference Friday at Hackensack Meridian Health’s Riverview Medical Center in Red Bank to highlight the state-level mandates and efforts — which Murphy said will help small businesses looking for coverage on the marketplace.

Murphy said New Jersey is on a short list of states that have taken the lead in stabilizing the marketplace.

The state has passed two new laws in these efforts. The first created an insurance mandate, which was previously part of the Affordable Care Act but eliminated by the federal government last year. The second created a state level re-insurance fund for health insurers — also an Obamacare program — with federal funding,

These laws are intended to help insurers avoid premium spikes for the next five years, by allowing each to be reimbursed for any volatility in costs.

With these mandate laws, which help insurers better predict their enrollment, the increases for the insurers in New Jersey were only in the single digits.

That will decrease more with the funding in place to help shield insurers from spikes from the costliest insured members.

Department of Banking and Insurance Commissioner Marlene Caride said Friday that the effects of the state-level legislation are evident.

“These are real, tangible results for the residents of New Jersey,” she said.

The Center for American Progress has highlighted New Jersey as the national leader among states for having taken action to protect consumers from the federal rollback of the Affordable Care Act.

Murphy said New Jersey will not fall in line with the efforts from Washington, D.C., to reduce government involvement in health care coverage.

“We don’t believe in offering bare bones coverage, worth little more than the scrap of paper they are written on, is in any way sufficient,” he said.

State Sen. Joe Vitale (D-Woodbridge), who spearheaded legislation, said the steps the state has taken help operationalize and improve the health care system of the state.

“I’m pleased that my legislation brought us what I promised it would: lower-cost, quality health insurance for our residents, and a healthier, stabilized marketplace,” he said. “We were not going to allow the (President Donald) Trump administration to undermine the insurance market.

“We seized the opportunity to take the actions needed to hold down expenses and protect the accessibility to needed health care services for New Jersey residents.”

Organon declares paid time off for all employees on International Women’s...