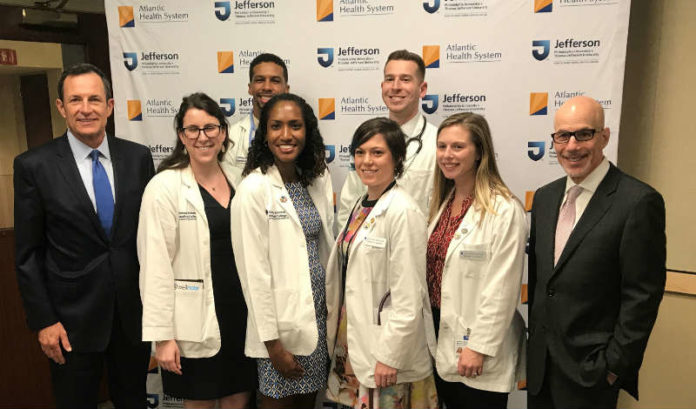 The two systems first announced the partnership in 2015, and, in March,  Dr. James Alexander was named the associate dean of the campus.

Alexander previously piloted a similar program at Cooper Medical School, where he was vice chairman for education in the department of surgery.

“The partnership of Atlantic Health System and Jefferson that enables the foundation of our (program) represents a bold commitment to excellence in medical education by both institutions,” said Stephen Klasko, president of Thomas Jefferson University and CEO of Jefferson Health. “It is the expression of a vision of the ideal physician, prepared to provide the best possible patient care in the 21st century.”

A ceremony was held Friday to announce the new partnership and the inaugural class of students enrolled in the Longitudinal Integrated Clerkship, as the program is known.

“Today is all about our students, who are truly pioneers in medical education,” said Brian Gragnolati, CEO and president of Atlantic Health System. “Their desire to learn and engage with patients in innovative ways will enable us to create the future of care we all envision — one that puts the patient at the center of a true network of personalized, accessible and affordable care designed for a lifetime of health and wellness.”

Aisha Golaub, one of the six students, said inpatient rotations are a new concept in medical education.

“It was almost magical to see these fields converge, and it felt like a sign that this year would be truly different than the traditional third-year experience,” Golaub said. “Third year is when you are trying to decide just what kind of medicine you want to practice, so the early exposure that the SKMC regional campus at Atlantic Health System offers to the variety of health care specialties is already proving to be invaluable.”

Recently, the state’s two largest systems have also created partnerships to include training as part of medical education, rather than simply sending students straight into rotations.