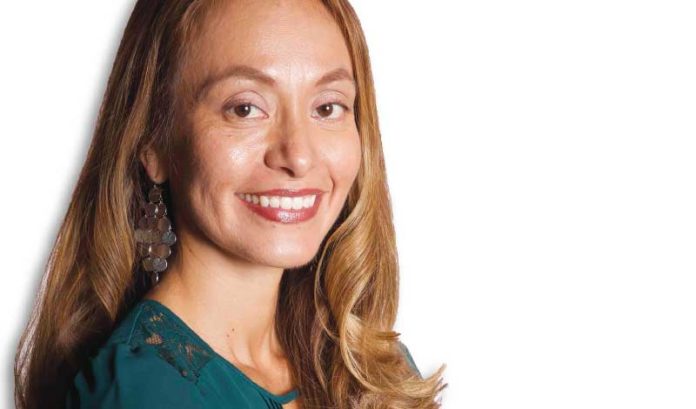 Hipatia Lopez would rather not count herself among the select few, exclusive as that can be.

The Jerseyan of Ecuadorian heritage — a social media-savvy inventor of a kitchen utensil she’s basing a business on — actually wishes she weren’t one of less than 1 percent of Latinas among patent-holders in the United States.

“When I started learning how few Latina inventors there were, it started to really tick me off,” she said. “I spent a lot of time telling everyone I know that we need more people to be given the chance to innovate in this community. I probably drove people crazy with it. But, it’s really important.”

Among other things, that fractional number of Latina inventors doesn’t bode well for there being a strong representation of this demographic as New Jersey develops its so-called innovation economy.

And the existing patent gap, exhibited in a report last month from the Institute of Women’s Policy Research, is only one sign of the overall missing Hispanic component as inventive entrepreneurial activity accelerates in the Garden State.

It’s something that Carlos Medina, chairman of the Statewide Hispanic Chamber of Commerce of New Jersey, has been talking to the state’s various stakeholders about.

“There could be more room there for Hispanics in the state’s startup scene, especially in the tech sector,” he said. “There’s a willingness to change that, but the outreach has to be more focused. And some of that is on us.”

Medina said his association of local Hispanic business owners is considering funding its own startup incubator that would have a tech emphasis — to better serve entrepreneurs in an oft-sidelined demographic in the innovation ecosystem.

“There’s a cultural and language nuance that a lot of tech incubators aren’t going to understand,” he said. “But we’ve perfected it, so to speak. I think if we were to partner with a tech incubator, or even launch our own, we’d see a much larger participation by Hispanic entrepreneurs.”

There’s no shortage of entrepreneurs in the local Hispanic community. The chamber claims there are more than 80,000 between the state’s Hispanic-owned small businesses. It’s just that a large majority are in food-related businesses or professional services.

As it stands, the lineup of startup incubators and accelerators in the state — a growing list of players as the governor’s administration and various higher education institutions make entrepreneurship a priority — aren’t set up to get more Hispanics participating in emerging sectors of the economy, Medina said.

“Maybe they can find success going forward with second-generation Hispanic entrepreneurs, but if they’re seeking some of the newer arrivals, they’ll struggle with cultural competency,” he said. “I’m encouraging incubators to reach out and partner with our organization for that.”

The organization’s interest in incubators is a natural extension of its Hispanic Entrepreneur Training program, which it has been developing over the past few years. It offers bilingual courses that provide insight to those looking to form a business. The 15-week program recently graduated 36 entrepreneurs in a mix of mostly traditional industries.

The chamber wants to get involved with bringing Hispanic entrepreneurs into emerging sectors, too. Medina said that begins with drawing closer to organizations that put on technology-focused events or other networking activities.

“At those events, sometimes it’s just a high level of entrepreneur that’s attracted to it, and we haven’t seen (the Hispanic community represented),” he said. “That was happening just last month with the Amazon-sponsored VOICE Summit in Newark. To their credit, though, they realized they needed to get more Hispanic entrepreneurs involved. So, they gave us complimentary admissions to drive some of our members there.”

An entrepreneur such as Lopez would love to see a stronger representation of Latinas and Latinos in all parts of the state’s startup sector. For her, it’s about posterity.

“I think of my daughter,” she said. “I just want her to be able think outside the box; to think of everything as being possible.”

Hipatia Lopez had a nifty idea: a stainless-steel kitchen utensil that could make pressing the folds together on half-circle pastry items quick and easy.

But there was no shortcut to making her product, which she branded the Empanada Fork, into a full-fledged business.

“I’m a mother of three who was working in public accounting,” she said. “And in the beginning, certain manufacturers wouldn’t even consider speaking to me unless I was an established company. Knowing how to get around that was a whole learning process.”

A few years later, she not only had a real company, but she was being named a winner of the Home Shopping Network’s Project American Dreams, a nationwide pitch competition for minority entrepreneurs.

“It was an extraordinary experience,” she said. “I had to take a minute in the corner by myself, because so many cameras. But it helped me get people to realize this solution exists. So, now, I’m really able to grow.”

Reach Carlos Medina of the Statewide Hispanic Chamber of Commerce of New Jersey at: medinac@robinsonaerial.com or 908-813-3900.