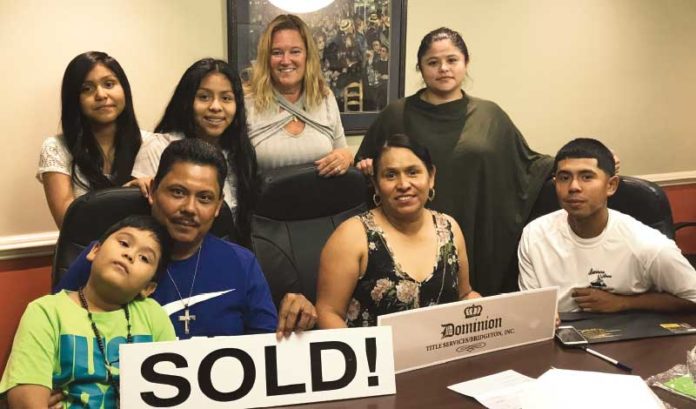 North Jersey Federal Credit Union is, like all lenders, contending today with a slowdown in the mortgage market as interest rates creep up.

However, unlike the state’s other lenders, the institution is looking at the prospect of a new group of long-ignored potential homebuyers: New Jersey’s many Hispanic immigrants.

A year ago, the credit union launched a program that allows noncitizens to use taxpayer numbers and other forms of identification to secure mortgage loans. It has opened the doors to homebuying for six immigrant families since. No other financial institution in the state has such a program.

This isn’t the only “first-ever” when it comes to this credit union’s interaction with the Hispanic community. It can claim that distinction as well for making a website available to Spanish speakers, which no local credit union had done. It was also the state’s first to receive a designation referred to as “Juntos Avanzamos,” or “Together We Advance,” as a symbol of its Hispanic immigrant outreach. And, under the leadership of Lourdes Cortez, North Jersey Federal Credit Union became the first credit union in the area to have a Latina as CEO and president.

James Giffin, chief operating officer of the credit union, said his organization’s position at the forefront has been motivated by it being stationed in cities with large immigrant populations, such as Paterson and Clifton. But he’s less sure about why it remains an industry outlier.

“I just think there’s lot of people in the country that aren’t as sensitive to this population; there’s a prejudice,” he said. “And maybe that goes for (this) industry, too. … I get the sense that a lot of banks just don’t pay a lot of attention to these communities.”

Giffin added that, given that this a growing demographic, lending to this group through any avenues available to financial institutions would seem more obvious than not.

According to a 2016 report from the National Association of Hispanic Real Estate Professionals, the Hispanic community has been defying trends, with recent increases the amount of the population that owns a home. Hispanics will represent nearly 60 percent of homeownership gains within the next 15 years, the report projected.

Regardless, half of Hispanic households are either entirely unbanked or underbanked. And Hispanics who aren’t citizens but do have some form of identification haven’t participated in homebuying almost at all, due to their limited options.

“A lot of Hispanic immigrants have been here for many years, but haven’t been able to take the step of buying a home and have to rent instead,” Giffin said.

To utilize the credit union’s mortgage program, would-be homeowners still need to have the documentation in the form of an Individual Tax Identification Number card or consular cards. Lending in this way was made possible through an initiative of the National Federation of Community Development Credit Unions.

It hasn’t been overly difficult for the credit union or its immigrant customer base to do these loans with the same rates and conditions as any other home loan. Except there’s still a great deal of apprehension about it.

“A big problem we’re having with the program is that we’re North Jersey Federal Credit Union, and some people in the community see the word ‘federal’ and assume we’re part of ICE or connected to federal deportations,” Giffin said. “We’ve tried to educate the community through videos or editorials (in Spanish) newspapers. Because of the nomenclature, some are still scared to reach out to us because they think we’re the government, but we’re not.”

Neither Giffin nor his cohort at the credit union wade into the ongoing national debate surrounding immigration. But they’re also not shying away from expanding services to immigrants amid that fiery debate.

“It’s just that in the markets we’re in, it only makes sense for us to help these immigrants, so that’s what we’re making commitments to doing,” Giffin said. “We’re always thinking of how can we better serve these people. We want the American dream to come true for them.”

One thing Giffin clearly believes is that providing a path for this significant chunk of the population to buy homes would only benefit the Garden State’s communities and, ultimately, its economy.

“Anytime someone buys a home they’re putting roots down and making a commitment to the community,” he said. “Homeowners tend to keep their property up in a way that renters may not. But these people are also going to be buying appliances, furniture and making other home purchases at local businesses, on top of paying property taxes into the local school system.”

Several state leaders and the members of North Jersey Federal Credit Union have made a point of praising the institution’s services for the immigrant community.

But James Giffin, an executive with the credit union, said a lot of the opposite also comes with the territory.

“We get a lot of bad emails from people, not always even from New Jersey,” he said. “But we’ve been known for pushing the envelope and getting some of that.”

He said the backlash was even worse in 2011. Back then, the credit union announced it was going to be working on a banking product with a mosque in Paterson, a key city in the credit union’s market — and one with an enormous Muslim population.

“You can’t pay or earn interest as a follower of Islam,” he said. “So, we came up with products to get around that stay compliant with their religion. In doing so, we got so many threats from people all over the country. But, honestly, it didn’t really bother us. We’re used to it.”

ConnectOne to acquire Bank of New Jersey in $113M deal