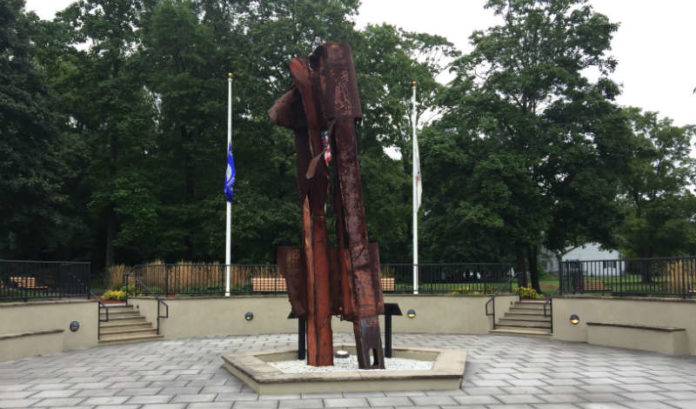 Jennifer Tyburski was sitting in the only car in the parking lot of the Morris Plains 9/11 Memorial, staring at the twisted metal that makes up one of the state’s many parks devoted to the day.

It’s a day when so many look back at the fateful morning of Sept. 11, 2001, remembering those who were lost in the terror attacks at the World Trade Center, the Pentagon and in Pennsylvania, and perhaps trying to understand how it changed anyone who went through it.

Tyburski had another reason: Her almost-3-year-old son in the backseat.

“My husband and I were talking last night,” she said. “We felt like he was finally at an age where he could begin to learn about what happened. We feel it’s important as Americans.”

Tyburski, who recently moved to Morris Plains, did not lose any loved ones on that day. In fact, she lived states away, in Vermont.

“I was a senior in high school,” she said.

Tyburski said it wasn’t until she got to the tri-state area that she truly understood the impact.

“When I moved down here, I saw the true significance of the event,” she said. “It was more of a TV show for us.

“I have friends who say, ‘I watched it live.’ I had co-workers who lost friends.”

Everyone has their own personal story about that day.

Kramer worked on the 17th floor of Tower One as a 26-year-old marketing manager for Empire Blue Cross Blue Shield.

He arrived to work late that day, one of those twists of fate, he said.

“I made it into the lobby of the mall, where they had restaurants and things,” he said. “I tried to get into the tower, but they were turning people away.

“So, I tried to go to the North exit, which was the side of the building that got hit, and a police officer walked in from the outside and said, ‘You can’t go out here.’

“Eventually, I went back to the train, took a few subways and got back to Hoboken. It wasn’t until I got there that I learned what had happened.”

For Kramer, the moment was career-changing.

“I’ll admit, I was really unhappy with what I was doing,” he said. “It was the traditional rat race.

“I was coaching youth hockey at the time and everyone said, ‘You’re so great with kids.’ So, soon after, I got my teaching certificate.”

The school assembly at Borough School — which includes grades three through eight — likely was the same as so many others around the states. Kids sung “The Star-Spangled Banner,” another played “Taps,” and two were picked to read their essays about the day.

So, it’s not a matter of remembering, but actually telling and teaching.

Webber, a Morris Plains resident and an Assemblyman running for a vacated seat in the U.S. House, spoke to the fifth- through eighth-grade students who gathered for the assembly.

He didn’t speak about politics. He didn’t speak all that much about the day — others had that covered. Webber talked about how ordinary citizens came together and had an impact.

“Seventeen years ago, the heroes of 9/11 received an opportunity to do good in the face of senseless violence,” he told them. “Today, we recall that, to the very best of their ability, they took that opportunity and they met their responsibilities. And we pass along to future generations, not just memories and pain and loss, but lessons on how America responds when it is challenged.”

Afterward, Webber explained why he feels these events are still important.

“When kids go to an event like this, it’s hard for me to believe they don’t see not only the anguish and the pain of the people who talk to them, but the sincerity about what happened,” he said. “I think that’s very important.

“Fortunately — or, unfortunately — we have a lot of video footage of that day. And when kids are old enough to understand and process it, and understand what happened that day, it can begin a discussion of why it happened and what the proper response is.”

Frank Druetzler has been the mayor of Morris Plains for as long as anyone can remember. Truth be told, it will be 32 years when his final term ends this fall.

Druetzler has made it his life’s work to ensure Morris Plains has things that other small towns can only dream of.

Druetzler was able to get part of the wreckage of one of the Twin Towers — and then made sure it was placed in a spot (on Route 53, by the underpass) where everyone can see it.

And not just residents of Morris Plains.

“We put that memorial at the spot where it’s a county road, a state road and by the railroad,” he said. “I don’t think any other memorial is visible from a railroad. We did it because we want to make sure people remember.”

Druetzler wasn’t surprised when he heard one of his newest residents made a trip there with her son.

“Candidly, almost all year long, I see cars there,” he said. “But, around this time of the year, you see a lot more people come in, sit down and reflect.

How long the memory will last remains to be seen.

While Tyburski is trying to introduce her young son to history, Druetzler said so many who witnessed that day are slowly letting it fade into the past.

“At the county level, you’re already seeing fewer and fewer people show up,” he said.

Druetzler is determined to do all he can to keep the memory alive in Morris Plains.

He doesn’t want 9/11 relegated to the history books, like so many other big dates have been, such as the Dec. 7, 1941, attack on Pearl Harbor — “A date which will live in infamy.”

Druetzler said it’s all about the kids.

“I think you keep the memory alive by having young people involved,” he said. “Without having them involved, and continuing on with that history, it will die off.

“That’s why we try to keep the school system involved. We have to. We have to remember.”

Food for the hungry: How industry, labor and government are stepping...