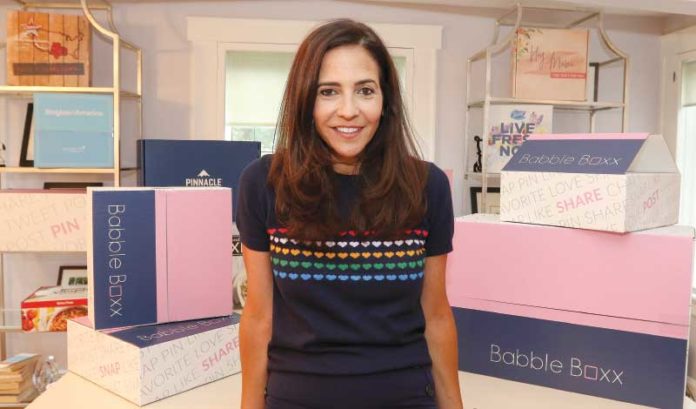 Sherri Langburt knows how to capture a brand’s attention.

“When you pool advertising dollars with other brands, you can get more placements, more shares and more impressions than if you create a campaign by yourself,” she said.

All for less money, she added.

But, now, word really is getting out. Recently ranked in the Top 500 of this year’s Inc. 5000 list, BabbleBoxx is one of New Jersey’s — and the nation’s — fastest-growing private companies.

The multimillion-dollar business, however, was not always widely known for its unique co-sampling promotions.

“I started the influencer marketing company in 2007,” Langburt said.

Her story is a classic example of seeing — and seizing — an opportunity.

Langburt said she had been working as a general manager for Weight Watchers when she began to realize a trend.

“A lot of brands were coming to us and talking about Mommy bloggers,” she said. “So, I began this business with one blog.”

BabbleBoxx only was introduced in 2016.

“Our clients started to ask for help in securing promotional partners,” Langburt said. “While we would help them fulfill these requests, we realized that no one was truly focusing on partner marketing.”

To combine that concept with her company’s core concept of influencer marketing, Langburt created what she called a “co-op sampling program.”

“In wanting to elevate the experience for both brands and influencers, we looked at the current consumer-oriented subscription boxes available and thought, that would be a unique way to do this,” she said.

“We curate between five and seven noncompeting products and come up with themes, such as food, fashion, fitness and health, kids, gift guides, you name it, in which brands can send us applicable products to then send to the appropriate influencers,” Langburt said.

BabbleBoxx then reports back on those products’ online performances.

“There are very professional categories of influencers today, including, of course, Mommy bloggers, but also architects, teachers — all different types of activations in both the B2C and B2B spaces,” Langburt said. “And, since every BabbleBoxx goes out to different groups of influencers, new clients and sponsors always are signing on to become part of various promotions.”

BabbleBoxx, however, is highly strategic about which influencers they send to, Langburt said.

A kids’ back-to-school box, for example, would typically be sent to parents with school-aged children.

“But then we look at other criteria — aesthetic, tone, content, quality of writing and photography, social reach across different channels,” Langburt said. “We look at many different variables to make sure they are the best fit.”

The influencers are then paid by BabbleBoxx to write and speak about the products based on detailed guidelines.

“And the brands pay us to be included,” Langburt said. “When we have very specific themes, for example, we will think, OK, who sells school supplies, who sells great snack foods for lunch boxes — who makes sense for this box?

“We then research and contact brands to include their products, with nearly 85 percent coming back to be included in more.”

Langburt said the business is evolving.

“If we were creating a movie night box at the request of a brand, for example, that brand may have one product, but we then have to work to create the whole experience by curating other products,” she said. “For example, Whole Foods right now has created an entire Fall Flavors box with products sold in its stores — but, for a brand like Nestle Water who wanted to showcase its water in Texas, what could we do with that? Well, we curated different artisanal products from around Texas and created a tailgating box.

“We’ve also done campaigns with Make Up Forever, for example, that had each influencer choose what color foundation they wanted before we separately packed and fulfilled each box.

Brands already are sold on the concept.

New Jersey-based companies such as Audible, The Children’s Place, Garden Lites, Church & Dwight and Crispy Green all have utilized BabbleBoxx’s services, especially when sending to New Jersey-based influencers such as Angela Ricardo of “The Korean Doll,” Destiny Paquette of “Suburban Wife, City Life,” and Reesa Lewandowski of “Momma Lew.”

Still, though BabbleBoxx sends out nearly 300 BabbleBoxxes per week to various influencers, Langburt said she also wants to continue to grow the other segments of her company.

“The natural inclination for brands, for example, is to have influencers create their own videos,” she said. “But we have had a lot of brands come to us and say, ‘We want professional shot and scripted videos that the influencers can then share.’ So, we now have an in-house video production team for branded video activations.”

BabbleBoxx also creates custom events, such as a pop-up shop for Delta Airlines or a rooftop event for Coppertone, in addition to its core multisponsor events, such as its holiday-themed event in October.

“We bring in nearly 20 brands and 200 influencers for a cocktail party-meets-trunk show, where every brand gets to interact with the influencers and showcase their products,” Langburt said. “We host it right before Black Friday so that brands can showcase in particular the gifts they have lined up for the holiday season.”

With so much going on, it might be surprising to learn that BabbleBoxx only has eight full-time employees.

Then again, Langburt said, there is a vast arsenal of consultants, freelancers, designers, programmers and more to call upon in New Jersey.

Langburt said the company, which has a three-year growth rate of 1,136 percent according to its No. 449 rank on the Inc. magazine list, will continue to hire.

“We also would like to grow our programs with influencers, to partner with them on different revenue-generating projects and business development opportunities,” she said.

“I also would love to partner with larger agencies on their influencer marketing efforts, especially for those agencies who do not currently have those capabilities.”