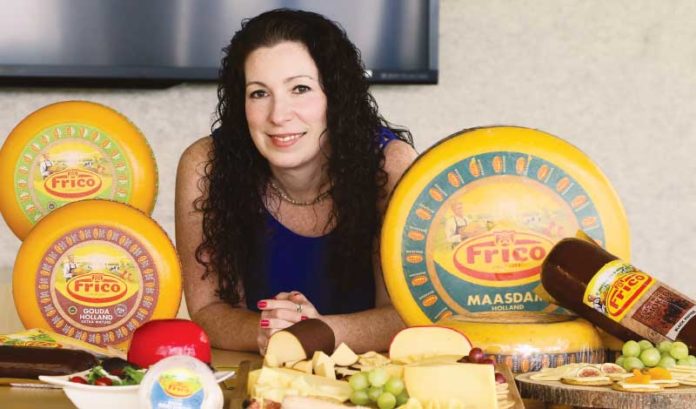 Debbie Seife said it was almost too “Gouda” to be true.

“I was working in dairy and cheese marketing and living less than a mile away without realizing this historic company was located here,” she said. “So, when the opportunity arose to be able to implement a ton of amazing ideas that this large and innovative company in the Netherlands had been able to accomplish around the world — but had not yet touched much upon here in the U.S. — that sounded like a lot of fun.”

Seife didn’t just reduce her commute by more than two hours when she joined FrieslandCampina in Paramus as marketing director just over a year ago.

She also united with more than 23,675 people employed by the nearly $14 billion global company.

The roots of Royal FrieslandCampina N.V., a Dutch multinational dairy cooperative based in Amersfoort, Netherlands, date back to 1871.

However, its status as the fifth-largest dairy company in the world is the direct result of a merger between Friesland Foods and Campina in 2008.

“The company produces, or assists in producing, a plethora of different products, from milk to alcoholic beverages, from infant formula to lactose powders used in pharmaceuticals, and from butter to desserts,” Seife said.

Various U.S. locations were consolidated to a single U.S. headquarters in Paramus in 2010, where 55 employees currently work.

“We import our product right into the ports here,” Seife said. “New Jersey is a fantastic place to be.”

The more than 19,000 member dairy farmers in the Netherlands, Germany and Belgium work to supply FrieslandCampina with raw material for products made available to bakeries, restaurants, food manufacturers, pharmaceutical companies and more.

“Yet, while the company owns the two largest packaging facilities in the European Union, we weren’t focusing much on selling packaged products here in the U.S.,” Seife said.

FrieslandCampina’s consumer dairy products currently are available in supermarkets in more than 100 countries.

“In fact, a lot of the cheese that has been sold here in the U.S. over the last 50 years has been ours — just sold under other brands,” Seife said.

That is about to change.

Frico, for example, is a flagship global brand for the company. It has been produced in Holland by cheesemakers for more than 120 years using 100-percent fresh Dutch cow’s milk.

However, while it currently is sold in more than 90 countries, consumers have not yet recognized it as widely in the U.S.

“So, we wanted to take a different approach by coming out with innovative items that would better meet consumer needs,” Seife said.

While still selling its core loaves, logs, balls and wheels, Frico is now producing items such as shaved goat cheese for salads, as well as value-added peel-and-reseal packaged cheese slices, snack-sized cubes, cracker cuts and wedges in flavors ranging from smoky Beechwood to sweet Massdam to mild Gouda, of which FrieslandCampina is the largest producer in the world.

“We are making it easier and more convenient for people to enjoy our products,” Seife said.

Consumer dairy is not the only division innovating and expanding, Seife said, so further hiring is expected companywide over the next couple of months.

“The idea is that Frico, as well as some of our other brands, will continue to become more well-recognized by consumers in the U.S.,” she added.

Debbie Seife said she was more than happy to join a company that was as good for the environment as it was for her commute.

“From meadow-grazing cows to solar-powered farms, FrieslandCampina is a highly efficient company very much focused on sustainability,” she said.

FrieslandCampina also is focused on succession planning for its member dairy farmers.

“Farming is simply not a 9-to-5 job, five days a week,” Seife said. “So, our company created programs to help educate younger generations in order to keep the farming tradition going.”

For more information on FrieslandCampina, contact Debbie Seife at debbie.seife@frieslandcampina.com or 551-207-0642.

With Eleven Clinton/Smothered Blues, Paul Profeta is bringing jazz back to...