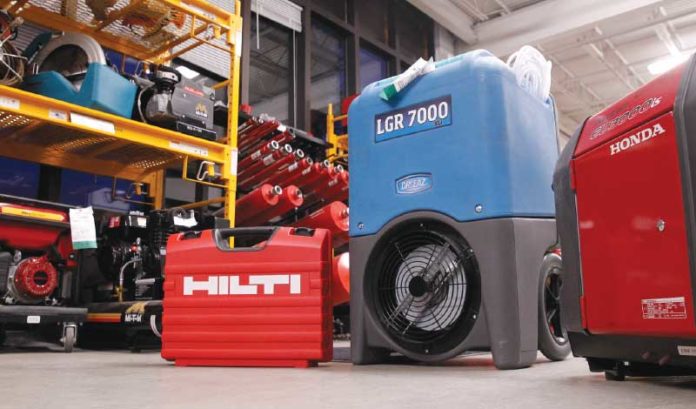 The calls started to come in late last week.

Generators, dehumidifiers, light towers — anything that would be needed for an emergency response to flooding and water damage.

Here’s the catch. They weren’t coming from the Carolinas, which are expected to take a direct hit from Hurricane Florence this weekend, but New Jersey companies, which are concerned the remnants of the latest “once-in-a-century” storm will impact the Garden State.

So said Rob Cowing, the regional vice president who is in charge of the five New Jersey locations for Herc Rentals.

“By late Monday, early Tuesday — just about everything we have was booked,” he said. “We got a ton of requests for not only small generators, but the large, one-megawatt generators. People wanted anything they would need for an emergency: All sorts of pumps, restoration equipment, air scrubbers, pickup trucks, you name it.”

Cowing said some people came to pick up the equipment, others had it delivered — and some just left it at Herc Rentals locations on standby, waiting to see if it was needed.

Standby, Cowing said, is a good way to describe his team of more than 100 employees.

“Everyone knows we’re on call 24/7 for this entire weekend — and maybe more,” he said.

If the storm misses New Jersey, as expected, Cowing said he is prepared to send equipment and people to wherever they are needed.

And, he said, while every natural disaster is different — “you never know where damage will occur; you could get major flooding 30-40 miles inland” — the response by HERC always is the same.

“It goes in stages,” he said. “Power is the first thing, then it’s the AC and heat. If there’s flooding, it’s obviously pumping out the building first and then remediation. It’s a process that could last 30-60 days, depending on how bad it is.”

The starting point, Cowing said, always is the same, too.

“It’s a fluid situation,” he said. “But that’s the beauty of Herc Rentals being a national company, we can handle the logistics.”

Cowing said all sales reps, service managers and technical support people know to have a bag packed. They could get the call anytime.

“A lot of them are former military people,” he said. “They always are the first to raise their hands, because they not only have experience working in crisis situations, it’s something they feel it is their duty to do. It’s inspiring.”