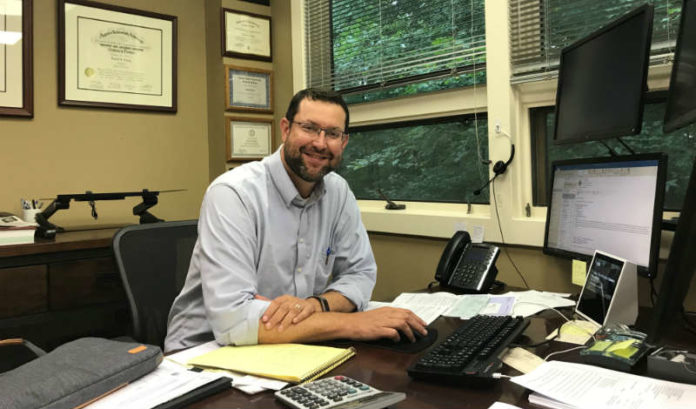 Last Thursday night, David Gray squeezed his 6-foot-5-inch frame into the tiny chairs that make up a second-grade classroom during Back to School Night at the elementary school his kids attend in Sussex County.

On Friday, he went to the law office that bears his name on Route 10 West in Whippany and did work on a real estate transaction (a restaurant in Morris Plains is being sold), a divorce case (surprise, surprise: something came up there) and an employment case relating to the departure of a bank president.

On Monday morning, he’ll be in Washington, D.C., handling the defense of a client who has been subpoenaed in the Mueller investigation.

Of all the twists and turns and drama associated with Robert Mueller’s investigation, this may be the hardest to believe: The lawyer for Jerry Corsi — an investigative journalist and/or conspiracy theorist who has written best-selling books, worked for InfoWars and is being subpoenaed to discuss his relationship with former Donald Trump adviser Roger Stone — works in an eight-person office where the phone often is answered by Gray’s wife, Ivana.

Gray, 40, has a quick wit and an easygoing nature. But he understands the seriousness of the situation. And he understands some legal experts may feel he’s out of his league representing Corsi.

He just doesn’t agree with them.

Gray, a 2003 graduate of the Seton Hall University School of Law, opened his own practice — the Gray Law Group — in 2007. The firm, which has three attorneys, does most of its work representing families and small businesses.

That’s how he got connected to Corsi, a resident of Denville, five years ago.

Corsi, 72, was awarded a doctorate in political science and government from Harvard in 1972 and has written six New York Times best-sellers, according to a recent bio. He most recently was the co-author of “Unfit for Command” and author of “The Obama Nation.”

And he has a long history of writings connected to presidential politics, Gray said.

“He tried to do everything he could to help Donald Trump get elected and, in the middle of that campaign, he had a lot of back and forth with a guy named Roger Stone, who was with the Trump campaign — and there was a lot of discussion of back and forth involving WikiLeaks and Julian Assange.

“That’s what this is about.”

“I just got a subpoena from the FBI,” Corsi told Gray. “And Robert Mueller’s name is on it.”

Gray, who had handled some smaller legal matters for Corsi in the past, said he began reviewing the potential issues in the case with Corsi.

“In going over all the information, Dr. Corsi was involved in all of these articles and publications during the campaign, but, at the end of the day, he’s certain he didn’t do anything wrong,” Gray said.

Gray said they both realize investigations such as these can go in any direction. And both feel Corsi is in the clear.

For Gray, that meant there was one logical thing to do.

“Our strategy was to cooperate and testify truthfully pursuant to the subpoena.”

Because of that, an appearance before a grand jury was put on hold.

On Monday, they will sit across from four to six attorneys on the investigation and answer questions.

Gray is not sure how long the discussions will last — he figures a few days. And he figures they will end with investigators wanting Corsi to repeat some of his remarks to a grand jury.

Gray does not feel his client will be charged with anything. But he understands everything is on the table.

“They have not charged Dr. Corsi with anything, but they have the power and legal authority to file charges against people, and that’s not lost on me,” Gray said.

The fact that so many high-powered Washington, D.C., lawyers would like to take his place isn’t lost on him, either.

“I have no doubt in my mind that they’d be champing at the bit to represent Mr. Corsi,” he said. “There are the high-powered D.C. lawyers who would love to get in on this case. There’s only a handful of lawyers in the world who are involved in the Mueller investigation.”

Gray feels his matter-of-fact ways could make him better qualified.

“I have interacted better than I think a D.C. lawyer would with the special counsel’s office,” he said.

Gray feels the law is the law.

“On the one hand, you could look at this and say, ‘Wow, this is really big and intimidating,’ but it’s not really how I look at it,” he said. “The investigators at the special counsel’s office are real people. We’re all operating under this framework of laws. And, here’s a little secret about the legal business: None of this is rocket science.

“They want to know what information he has. He, by law, has to testify truthfully. There’s just no ifs, ands or buts about that. So, we can make a mountain out of a mole hill and get a high-powered D.C. lawyer to turn this into something it’s not, or we can do what the law says we have to do a deal with it. And that’s what we’re doing.”

Gray recognizes the lawyers on the other side of the table are of top caliber.

“These guys are not good attorneys, they’re great attorneys,” he said. “They are extraordinarily bright. They are probably the best of the best.

“Here’s where I see their smarts as a lawyer. They are extraordinarily prepared. And they are very strategic on getting information and what they disclose. They are so well-prepared, they don’t miss a beat.”

Gray knows he will be pressed to match the investigators.

“It’s heavy lifting, yes,” he said “But it’s certainly not outside the scope of what we can handle.

“It’s great to be a part of it, but, if you think you have to be a high-powered D.C. lawyer to handle this well, who could be qualified to begin with?

“There’s only a handful of lawyers who are going to have some contact with Mueller’s investigation one way or another. I don’t think you have to be a high-powered D.C. lawyer to be one of those lawyers.”

That sale of the restaurant in Morris Plains? The client is paying the same rate as Corsi.

Gray won’t disclose what he is charging — he’s just confident he’s charging far less than a big-shot attorney would.

“I’m guessing I’m probably a fraction of what a high-powered D.C. lawyer would cost,” he said. “I don’t want to get into my fees, but it’s no different than what I would charge anyone else.

Gray, who has been on the council in Byram Township since 2014, said he has no interest in using this case to propel any sort of career outside of law.

And he said he hasn’t thought for a second how representing Corsi could impact his law business.

“My goal is to represent Dr. Corsi to the best that I can,” he said. “I don’t know how it would play out in the future one way or the other.

He admits representing Corsi is different than anything else he’s done. But he said he’s ready and qualified — and that he’ll take with him the lessons he learned while clerking for Judge N. Peter Conforti after law school.

It taught him he could compete with anyone, he said.

“I don’t want to be selfish and do my client a disservice by handling a case that people think a big-time D.C. lawyer should handle, but those big-time D.C. lawyers know the same amount of criminal law that I do, and the people handling the investigation are all operating under the same legal framework,” he said. “So, should there an intimidation factor?”