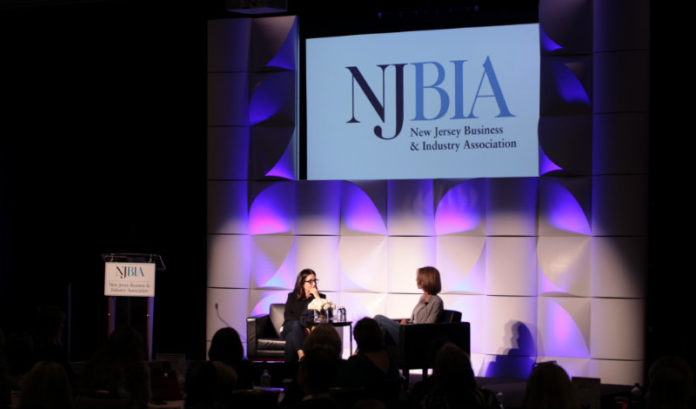 Jill Kaplan had worked for nearly 30 years in media and publishing, she said.

Then she became the president of New York and New Jersey for United Airlines.

“I loved my job and was very fortunate to have interviewed and met with many incredibly interesting people — including Oscar Munoz,” Kaplan said.

Speaking to hundreds of business professionals at the Women Business Leaders Forum on Friday, hosted by the New Jersey Business & Industry Association at the Newark Liberty Airport Marriott, Kaplan explained how she had been a frequent customer of United during her career working as a vice president and publisher at Crain’s New York, a general manager at The Wall Street Journal and an advertising manager at The Economist.

“I wasn’t necessarily looking to make a change, but as Oscar, our CEO, spoke about his vision for this job, I thought, hey — maybe I’d like to learn more,” Kaplan said.

Inspired by the hardworking efforts of her mother and great-grandmother, Kaplan said she applied and was hired for the top job at United in a field she had yet to explore just 11 months ago.

“What an amazing opportunity to at this point in my life move out of my comfort zone and challenge myself in ways I had no idea I could ever be challenged with,” Kaplan said. “I already have grown so much.”

Michele Siekerka, CEO and president of the NJBIA, said empowerment such as Kaplan’s truly is a leadership skill.

“Our actions, what we all do together, absolutely is moving the needle and making a difference here in the state of New Jersey and in all of our communities,” Siekerka said. “Leaders become great not just because of their power, but also because of their ability to empower others.

“However, if we cannot do it for ourselves first, we cannot help anyone else.”

Deborah Degillio, president of New Jersey American Water, said that is precisely why she is so proud of the fact that her company both embodies and advocates for greater diversity, with women comprising half of its board of directors and half of its executive leadership team.

“We believe we should look exactly like our customer base,” Degillio said.

She said the company believes in acting like it, too.

“I love what I do, leading our team and setting strategy,” Degillio said. “But my most important job is being a mom to two boys with my husband.”

Degillio said she often is asked why she carries two mobile phones with her while at work.

“If one rings during the day, I know that it is my husband or my kids’ school, and I am going to answer it,” she said. “I’m lucky to have a company that supports the fact that, if I need to leave because my kids need me, my team always has my back.”

Steve Adubato, a broadcast anchor and author, said men like himself often are unaware of this sort of additional mental load for women, as well as the additional work they do at home.

“We’re clueless,” he said. “I took out the garbage this morning and wanted a gold medal for doing so. I read to our daughter and I wanted applause.

A father of three young men ages 26, 15, and 14, Adubato said his 8-year-old daughter is the most confident and bravest of them all.

“She speaks her mind in a way that I find I am powerless,” he said. “We’re talking here today about women coming together and being empowered, and, well, tonight, our daughter Olivia has insisted, engaged and persuaded us that she is having a sleepover tonight with eight other girls.”

By using a cost-effective agenda, no less, he added.

Adubato said this especially gives him hope for the future of female entrepreneurship.

“When you’ve been working long hours, sacrificing time with your family, and you decide, you know what, I can’t crack through and I’ve given enough — if you decide you’ve done everything you’ve could, I am a big fan of using your skills and tools to not only empower yourself but also to start your own thing and go into the marketplace for yourself,” he said.

That is exactly what Karen Kessler, founder and president of Evergreen Partners, did 25 years ago, she said.

Of course, it took her several jobs to figure out what it was she actually wanted to do, she added.

“It’s very difficult to find your passion when you are not exposed to it — so, I instead focused on supporting myself,” Kessler said.

Kessler said she began her career by simply creating a “rip and read” folder.

“I read everything, newspapers, magazines, everything, and I started a file with articles about people whom I found interesting,” she said. “Then I sat down over Christmas break one year and wrote letters to those people.”

The No. 1 rule in networking, Kessler said, is that people love to talk about themselves.

That led to her first major job, working for an unnamed philanthropist and the heir to General Motors.

“My (superior) then took me to lunch and said: ‘I’m quitting. I’m not going back. Can you just tell him that I quit? I’m sorry,’” Kessler said.

Kessler did just that, before stepping into the role herself.

In her next job, in politics, she said, she also began covering for her superior, as she had begun taking longer and longer breaks during the workday.

“A year into the job, in the middle of the workday, I received a call that she had just passed out in the cosmetics department of Saks Fifth Avenue,” Kessler said.

When her superior quit, Kessler said she again stepped up.

“I didn’t have a career, per se, but I did have all sorts of jobs in which I supported myself,” she added.

She also began to develop a network.

“Networking is when we sit here and exchange business cards and connect on LinkedIn,” Kessler said. “But a network is about investing in a person and asking: ‘Can I have coffee with you? I’ll bring it.’”

When she ended up on the New York Stock Exchange precisely because of such a request, she realized she thrived on the adrenaline and the news cycle.

“That’s when I realized I needed to be in this field,” Kessler said. “And here we are today.”

Why head of Harvest Restaurant Group is worried about future of...