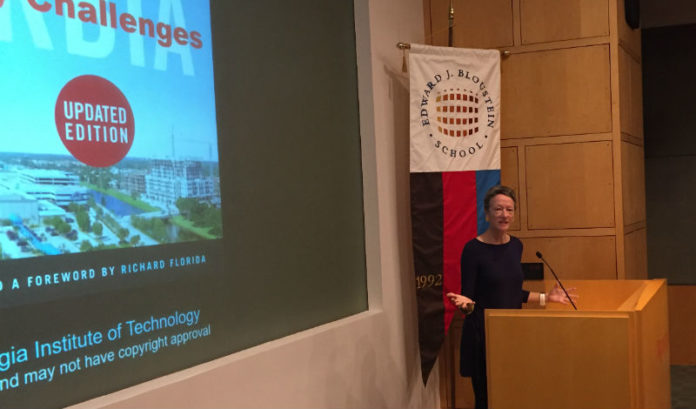 Ellen Dunham-Jones literally has written the book on suburban redevelopment. Her effort, “Retrofitting Suburbia,” came out in 2009 (ahead of its time). She is working on its latest update.

So, when the Georgia Tech professor came to Rutgers University to discuss her decades of research on the subject, it wasn’t hard for her to point out some of the numerous municipalities around the country that are solving their problems with dying (or closed) malls or vacated suburban office parks.

Belmar, in Lakewood, Colorado, was one of the first malls to be recreated in what Dunham-Jones called the new urbanism, which is an urban mixed-used facility in a suburban location.

And University Town Center in Hyattsville, Maryland, is a great example of an outdated suburban office location turned into a mini urban city.

So many areas across the country have urbanized their suburbs, she said, creating work-play environments that people want. More importantly, she said, they are locations where young people can afford to live.

Dunham-Jones said New Jersey — with as many dying malls and outdated office parks as any other state — can copy the model.

“(It) has the type of properties that are primed for this redevelopment,” she said.

Of course, then there’s the Jersey reality.

Dunham-Jones knows it. And don’t be fooled by the current Georgia Tech address; she’s no outsider. Dunham-Jones was born in Jersey, raised in Jersey and educated in Jersey (undergraduate and graduate degrees from Princeton).

She’s well versed in the state’s biggest hinderance to redevelopment.

“New Jersey’s fractured system of governance — very small townships and boroughs — means that, also, the planning departments tend to be quite small,” she said.

“The places where you tend to see a lot more ambitious retrofits are places that have a big county planning government and a lot of folks who have the capacity to negotiate these very complex and very customized public-private partnerships.”

The esteemed panel that followed her at the event at the Bloustein School quickly agreed.

Charles Latini, president, American Planning Association-New Jersey, talked about a lack of leadership — at all levels of governance.

Carl Goldberg, the longtime developer and co-chair of the executive committee of the Rutgers Center for Real Estate, said the biggest problem is just getting people to talk about the problem — and its potential solutions.

“I can’t tell you how many dozens of mayors won’t even open the doors to have a conversation,” he said. “So, there is no public forum that ever takes place because they don’t even allow you to get to that public conversation.

“And that’s the horror of home rule here in the state of New Jersey, and why it’s really crippling the future.”

There is some hope.

Morristown Mayor Tim Dougherty has been a key part of making his town one of the great development success stories of the last two decades. He said the Morristown model can be copied.

“It’s all doable if you have people who are willing to pull up your sleeves and leaders who will not stop when they have two people who say, ‘You can’t do this,’” he said.

“(Leaders need) to be out front and get legislative bodies to work with you.”

Dunham-Jones said the payoff is worth it.

Creating mini urban locations in the suburbs provides a way (and a place) to keep millennials in the state — one of the state’s biggest problems. She said examples across the country show these new suburban urban spaces are a boom for the more authentic urban spaces.

Best of all, she said, no one is hurt by creating them.

N.J. borrowing: Why actual amount could be far lower than what...

A look at how Gov. Murphy answered an incoming attack from...