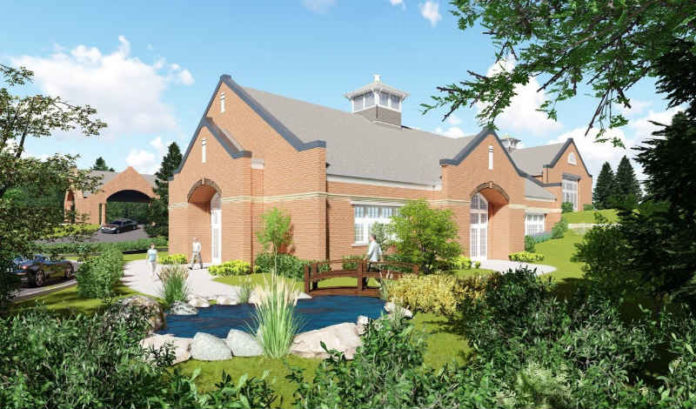 The ballroom, integrated with the latest technology, including massive video screens, has more than 5,400 square feet, can comfortable seat more than 300 — and can easily be subdivided into thirds.

And all of it comes with a contemporary feel — in with white walls, lots of light and wrought-iron railings, out with dark wood.

“We’re so excited about this space,” he said. “It will help us take our events to a higher level.

“We really want to step a little bit more into a more contemporary vibe. And, between the look and the technology, we feel we have.

The addition had its grand opening ribbon-cutting last week. Or, perhaps it was a reopening of a club that opened in 1994.

“The new space is allowing us to reopen, really, with the original founders’ vision, which is to provide both event space and daily dining.”

The Park Avenue Club is not your traditional events space.

“The concept has always been and still remains that the Park Avenue Club is a social dining club for private members and their invited guests,” Smith said. “The dining club has a greater mission in that every dollar we net, as a nonprofit, finds its way back to the foundation.”

Smith said the foundation has a distributed more than $6 million to local charities and local cultural organizations since it opened.

All of this means you have to be a member to have an event there.

Smith, however, said the barriers to entry are low.

Individual and corporate memberships can start as low as a $1,500 initiation fee plus annual dues of $1,500 and an annual minimum of $850 for dining.

The membership, he said, comes with reciprocal memberships at more than 195 clubs worldwide, including many in the area (Smith mentioned the Princeton Club in Manhattan and the Union League Club in Philadelphia) as well as many prominent New Jersey country clubs.

Smith said the new events space makes it more than worth the membership — and that the space was created with corporate events (as well as weddings) in mind.

“We were watching our corporate business decline a little bit, in all honesty,” he said. “The technology that went in, not only with just automated screens on the projectors that come down out of the ceiling, but the smart wiring that’s behind the wall was put in specifically for the corporate side to really allow us to hold any type of corporate event, from a gala to networking to a corporate meeting.

“Our goal is to bring in businesses for hourly use, whether it’s an all-day meeting or taking the space for several days for retreats. We wanted an environment in the new space that was fitting of weddings, but we didn’t want that space to offend the corporate member.”

Jeff Rawding of F.J. Rawding AIA in Morristown was the architect. Paul Natoli of Joseph A. Natoli Construction in Pine Brook did the construction, which started July 5, 2017.

Smith feels their efforts will help the club attract a new generation of members.

“What we’ve been seeing is, when C-suite executives retired, we were not necessarily watching their younger-generation replacements join,” he said. “And we absolutely attribute that, through a lot of analytics and focus groups that we’ve conducted over the years, that we were just a little bit dated.”

That’s no longer the case.