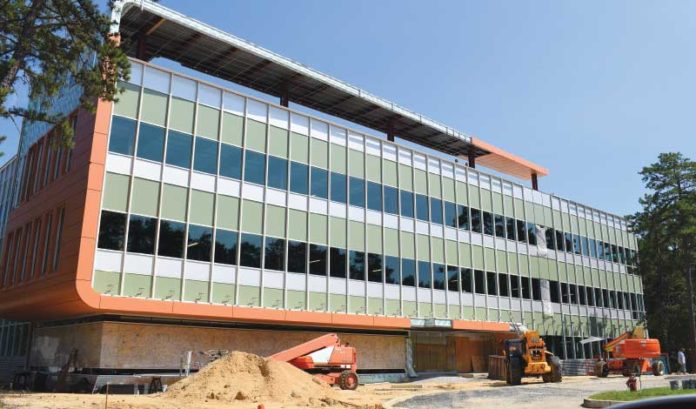 The reason for the change from a regional college, Stockton University, to the North Jersey school is simple, according to ACIA Executive Director John Lamey.

“A research park needs to be associated with a research university,” he said.

With a research education organization at the helm, it boosts the visibility of the project as well as links private industry, academic research and student interns in order to get products to market faster in the aviation industry, he said.

The area has a natural tie to the industry, since a branch of the Federal Aviation Administration is nearby. It will open a new office in the first building to be erected on the aviation tech park site.

Don Sebastian, CEO and president of NJII, said its link to the research park would mimic similar modern-day successes, such as Silicon Valley and the Cambridge hub in Massachusetts. Whether the academic arm does the research or works as an adjunct, there is no denying the bond that is needed, he said.

Plus, it opens up the potential for research funding.

“Research funding requires an academic research entity to be the recipient,” Sebastian said. “If not a university, then an established 501(c)(3).”

And while municipalities can also pursue the research or federal dollars, Sebastian said that’s not their business, so it’s difficult for them to compete for funds.

The 58-acre National Aviation Research and Technology Park has struggled to develop since 2009.

But, with the first building — of seven planned — finally up and ready to open in October, other plans and concepts are starting to shape up.

One such idea is to make Atlantic City Airport a testing site for all the products developed at the park.

Another is to make the airport a smart airport.

That is just in the concept phase, but an idea that makes sense to Sebastian.

“I’m not reluctant to say we think hubs and clusters need to have a defining theme, like a theme park,” he said. “It seems self-evident an aviation tech park next to an airport has some elements of aviation research.”

In a world where the Internet of Things and smart cities are a developing trend, the idea is to apply the concept to improve air travel, airport operations and aircraft maintenance.

“And attract developers in,” Sebastian said. “That’s where we can apply our secret sauce to bring in inventors, investors and end-deployers and start to accelerate turning new technology into application.”

Because the FAA is involved, the building with be running fiber-optic cables — another perk Sebastian feels will help attract tenants.

And the building itself is physical proof the project is finally taking off.

The building is built to LEED Silver standards, even though actual LEED certification was not pursued by the team, according to Tim Edmunds, ACIA project manager.

The floors are granite, the ceilings will be wood panels and there is a rooftop lounge that will have wood floors and wall-mounted lighting.

The boost the building gives the area around the airport zone is immeasurable, according to Howard Kyle, chief of staff to County Executive Dennis Levinson.

“It can give a company reason to locate some or all of its operations,” he said. “Now, you have a powerful incentive package and you have a product to sell. We never really had that before.”

In fact, the project has languished for years for a myriad of reasons. It is finally pulling together with a more cohesive plan.

Initially, it was referred to as the NextGen Park, but it is now dedicated to anything to do with aviation and the advancement of aviation research. That means working with NASA, private airlines, aircraft companies, defense contractors and homeland security.

“Everyone in the area has been historically fixated on tourism,” Lamey said. “We were making an effort to move people out of their comfort zone and move into something that was new, different and unfamiliar. People don’t rush into that. Now it’s starting to look real, now we’ve been able to get more interest.”

Kyle said among the many setbacks were the prior managers of the project. Between the lack of a financing plan and poor infrastructure planning, it was clear the previous managers bit off more than they could chew.

But now, Lamey said, everything is moving swimmingly.

“We are all rowing in the same direction,” he said.

That includes moving in a direction, with the state’s help — between a conditional veto on designating the area around the A.C. airport a Garden State Growth Zone and applying for the Economic Development Authority’s innovation incentives — that could create a new Research Triangle, like the one in North Carolina.

The New Jersey triangle would include Cape May Airport, which is seeing interest from drone startups, and Joint Base McGuire-Dix-Lakehurst.

The county was never supposed to build a tech park, it has always been the goal to build an aviation industry, Kyle said. Organizers feel that is what is being built now.

Roof4Roof’s Anania wants to use talents, profits to do good