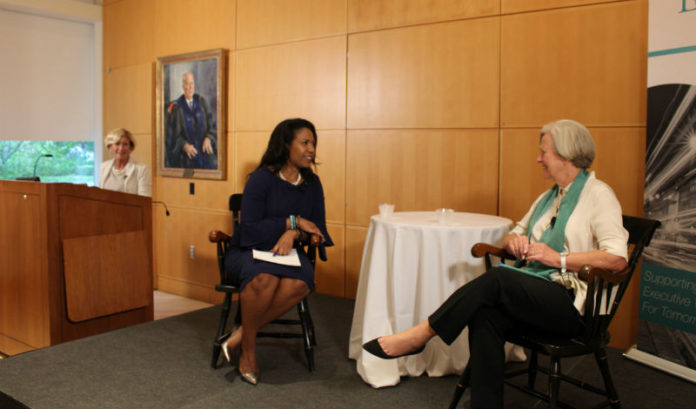 One of the more extraordinary things about becoming president at Princeton University, Shirley Marie Tilghman said, was the opportunity to become even more global.

“Princeton is a global university,” she said. “Both our faculty and our students are immensely international, coming to us from all over the world, and it is incredibly exciting to have a university body that is able to bring perspectives with them from all of the continents except for Antarctica.

“The presidency certainly gave me an opportunity to spread my wings to places I probably never would have been or worked with had I always remained in the laboratory.”

“EWNJ is thrilled to launch this inspiring speaker series featuring some of the world’s most renowned women leaders who live right here in New Jersey, and we could not be more excited to welcome Professor Tilghman as our first speaker,” Davis said. “The EWNJ Master Class series is designed to be an illuminating experience with the brightest minds in women’s leadership.”

Tilghman, a world-renowned molecular biologist and still a professor at Princeton, became the university’s first woman president in 2001. She served until 2013.

While singlehandedly raising two children, Tilghman served on Princeton’s faculty for 15 years as a professor, founding director of the university’s multidisciplinary Lewis-Sigler Institute for Integrative Genomics and chair of the Council on Science and Technology, before assuming the presidency.

Tilghman also accepted numerous board leadership positions at several institutions, including her positions with Google (from 2005 until February of this year) and with the King Abdullah University of Science and Technology in Saudi Arabia.

The following is an edited version of answers to questions from Davis and the audience of businesswomen:

On being a mentor … Be respectful and treat your mentee in the way that you would want to be treated. You also must give them completely honest and empathetic feedback about how they are doing. One of the most important pieces of advice I got in college was, when I was a chemistry major, I had a chemistry professor who cared a lot about me sit me down and say, ‘Shirley, you’re never going to make a good chemist.’ And he was absolutely right. I think, had he not articulated that thought that already was someplace in the back of my mind, but I was afraid to confront, I might have tried to become an organic chemist — and it would not have been a happy story in the long run.

On politics … I am going to spend all of 2020 working for the defeat of (President) Donald Trump. … For example, one of the things I am determined to do is get this generation of students to vote, because they did not show up as they should have in 2016. We can have many discussions about why that was then, but both young women and men are going to need to show up now. I don’t know any other solution. … We have to become more political, we have to become more engaged and we have to run for office, as well as donate to candidates. I think those are the only things that will save us.

On pay equity … If you had told me 25 years ago that we would still be talking about this, I would have slugged you. It’s hard to know what to continue to say about how we are going to get beyond this, just like, how are we going to get our political system back on some sort of sensible course? I can no longer say that it will take time, because we’ve given it time and we’re still not there. There are deep structural issues within our society, all over the place, that are making these advancements extremely difficult.

On advancing women to boards … The world runs by lists. And the only way to get around this issue that I have ever found is to ask women to make them. … When men make lists, they make lists with men on it. So, the only solution is to make your own list, take it to your superior and say, ‘If you can’t think of anybody, how about these women?’ Because you and I both know that they are out there.

On the future … One of the most important things you can do within your firm is to give younger women opportunities to experience a leadership role. Harold Schapiro, my predecessor as president, quite deliberately went out and found women within the university and gave them roles where they could learn how to chair a committee or talk to a donor or do some of the things that, if they were going to rise in the administration, they would need to learn.

Stockton grows board of trustees, adding Lozano, three others