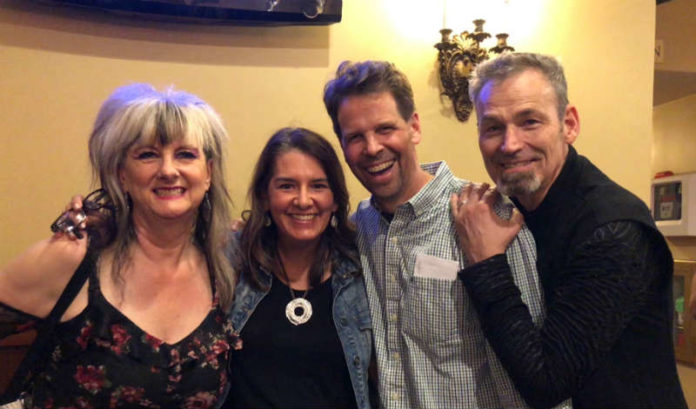 Before they even started playing — a three-song set that came after Bow Wow Wow and before When in Rome, Wang Chung, Naked Eyes and Flock of Seagulls — Bill Wadhams, the co-lead singer of Animotion, said a few thank-yous.

To Rob Juarez, the drummer in When in Rome, who created the Lost ’80s Live tour.

To Greg Ross, the merchandiser/promoter-turned-do-everything-guy who became the accidental emcee.

And, most of all, to the few thousand people who came to the State Theatre New Jersey in New Brunswick last week to hear some retro bands and relive some childhood memories.

That’s what the Lost ’80s Live tour is about: Gratitude for the opportunity to bring the past into the present.

Wadhams, a graphic designer in Oregon when he’s not playing retro rock star, didn’t want to miss the chance to acknowledge that before he, co-lead singer Astrid Plane and their original bandmates sang their hits, including, of course, “Obsession.”

“It’s incredible to be out there,” Wadhams said afterward. “We may do a few shows a year, but we haven’t had a tour like this since the ’80s, and we’re so thankful to have the chance.”

Plane, a vocals coach in Fresno, California, said she couldn’t overstate what the moment meant to her.

“It’s like I’m walking on air every night,” she said. “It’s the first time in 30 years that we’ve done this.

“It’s just been a gift from heaven.”

The most unusual summer tour, which began in July, included 26 shows — including one at the Electric Factory in Philadelphia this Saturday. It wraps up this week.

The artists said they will be sad to return to their day jobs. The fans — the ones who didn’t make it — may be sad to find out what they were missing.

Juarez has been lining up acts for the event for more than a decade.

Ross, who helped at various venues along the way, turned it into a full-time gig this year.

The founder and owner of ManicMerch in Syracuse, New York, Ross said he saw the financial potential all along.

“I always told the acts: Don’t forget to push your merch on stage, it will help make you money,” he said.

On one show, a local DJ who was supposed to emcee was a no-show. The bands asked Ross to do it. He’s been doing it ever since.

And, while he’s no professional announcer, he is a merchandising master. He helped reorganize the event so that, after each act, the bands would come out to the lobby, interact with the fans, take pictures, share memories — and sell merchandise.

“If I’m not here, they don’t do the signings,” Ross said. “And, once they started doing them, they realized how great they were.”

Ross hustles to organize the lines, gets fans to sign up for email updates, takes pictures to help the process run smoothly. All the while, he’s pushing T-shirts (for $40) and CDs and even a $20 bobblehead. (Did you guess? It’s Mike Score, the lead singer of Flock of Seagulls, who long ago lost his trademark hair.)

“It’s really great,” Ross said. “The fans are having fun and the bands, for the most part, get it. They understand it’s a chance to play again and meet their fans.

“You can’t imagine the number of times I’ve heard somebody say, ‘This is a dream come true.’

“It’s nice to be able to give somebody that moment.”

Ruppert, who said she still goes to about a dozen concerts a year, hadn’t seen Lwin perform live since seeing her at CBGB in the ’80s — when Ruppert was in her 20s.

“She was great,” Ruppert said. “Her voice was still there.”

Ruppert didn’t come specifically to see Lwin. She said she came to relive her past.

Plenty of others shared her sentiments.

And, while the tour has its mainstays, other acts jump on and off along the way.

The Philly stop also will feature Gene Loves Jezebel and Dramarama. Previous stops included Missing Persons and The Motels, among others.

The audience helped complete the flashback with T-shirts featuring a-ha, Frankie Goes to Hollywood, Men Without Hats and others.

Thankfully, no one appeared to be wearing leg warmers.

Kelly Blithe, the director of communications for the State Theatre, said the show was a perfect fit for the venue’s lineup.

Blithe did not have ticket sale totals, but the venue looked 75 percent full.

Ross said the show has been selling well.

He said an earlier event, in Colorado, drew more than 9,000.

Plane said she can still remember the glory days of the band.

The band said it knew it had a hit from the time the members heard Greg Smith’s now-all-too-familiar keyboard rift that opens the song.

“He’s just an incredible musician,” Wadhams said. “He played on ‘Billie Jean’ — and, before that, he toured with Marvin Gaye. We knew he was talented.”

It was during that time that Animotion played its biggest gig ever — a festival show in California for more than 100,000.

“As far as you could look out, there were people,” Plane said. “It was incredible.”

The band had two follow-up albums, a few more hits and some successful tours in Europe in the mid-’80s. But, soon after, it was over.

Infighting, sometimes between Plane and Wadhams, led to them both leaving in 1988. They both came back in 2001, the first time they played on an ’80s reunion tour.

Wadhams said Animotion 2.0 has been different.

But it’s not necessarily a blast from the past.

“It’s not so much reliving the song, but living the song in this moment with all sorts of people who have different experiences with it,” he said. “Look at the crowd — there are a lot of people here who weren’t even alive in the ’80s.

“To be able share this music with them and create present-day memories is special.”

Plane and Wadhams hung out in the lobby longer than any other band, taking in the moment and taking pictures for all who wanted them.

They were grateful to be in the moment again.

And they found out some things about the moment never change.

“I’ll tell him you said that,” she said with a laugh. “He’ll appreciate it.”