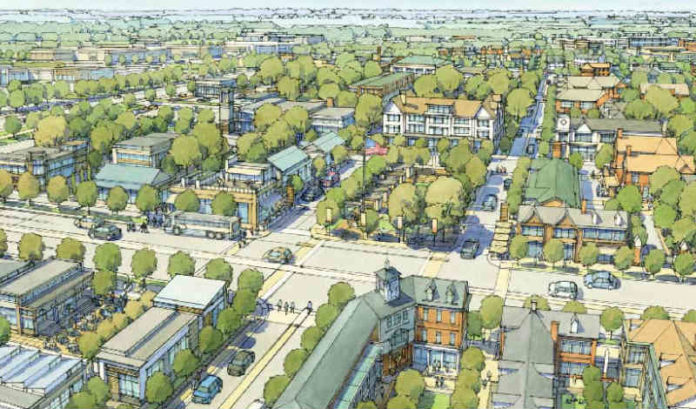 Howard Hughes Corp. officials said they didn’t want to file a lawsuit against West Windsor Township earlier this month, but they felt they had no other options following a more-than-decade-long struggle to redevelop a 650-acre site that has been vacant since agriculture research company American Cyanamid left the area in 2004.

“What’s been frustrating for us, is we believe there hasn’t been a sincere effort by the township and its officials to engage with us to really work collaboratively to address the concerns of the population and still end up with a really positive result that adds great benefits,” Adam Meister, senior vice president of HHC, told ROI-NJ.

West Windsor officials did not immediately respond to requests for comment.

Meister said the company has offered repeated suggestions to create a work-live-play environment for the site — the latest being a mixed-use development featuring nearly 2,000 residential units and 1.3 million square feet of retail and commercial space introduced last summer.

The plan uses a village center concept, with shops, restaurants and public spaces, a 32-acre site for a school and community recreation facilities, hotel and office space, residential neighborhoods with a full range of housing options, and 240 acres of open space with parks, walking and biking trails and preserved areas.

The site, which is surrounded by a rail line used by Amtrak, Route 1 and Quakerbridge Road, is only zoned for office, research and development, and limited manufacturing and warehouse uses, Meister said.

In the suit, HHC said this is a major hinderance to the site.

“The current (zoning) of the site is obsolete and has not been updated in any significant respect since it was adopted in or about 1980,” according to the lawsuit, filed in Mercer County Superior Court.

“The township has recognized the need for a ‘special planning study’ to consider alternative zoning options for the site since as early as its re-examination of the Master Plan in 2000, but has, for nearly two decades now, forestalled any such study.”

Meister said HHC has asked for the site to be designated a redevelopment zone and relieve the company from the limited manufacturing/industrial zoning the land is currently under.

“It’s really a tremendous opportunity to have a site of that size under single ownership under the crossroads of an area with proximity to mass transit and the rail line,” he said.

HHC has made a number of pitches for the site, including offering it as a location for Amazon’s second headquarters search.

HHC has said the area can serve as a community hub, can help the township meet its affordable housing obligations and can serve as a smart development for the area.

“It’s really a significant opportunity to create a live, work, play community that provides housing opportunities and amenities that address what’s occurred in New Jersey over a long period of time, which is a jobs-to-housing imbalance,” Meister said.

The latest proposal from HHC was presented to the public last summer — and was met with significant pushback from the community, which has expressed concerns about the influx of traffic, residents and schoolchildren, and resulted in the current legal standoff.

“There’s certainly been a concern about potential influx of new residents with new housing and its impact on schools,” he said. “We understand that concern and spent a lot of time in our process of going through our initial concepts to understand impacts and impacts on school districts. We’ve set aside, in our initial plan, land for a new school. I think we’ve addressed the issue to a significant degree.”

Meister said the ongoing interest in developing the site comes in part from the trend away from suburban office parks and toward mixed-use properties.

It’s no different than what the company has pursued in the 13 other states it has projects in, he said.

“What we’ve looked to do is … create a forward-thinking community that looks to make the community vibrant,” Meister said.

This can then attract companies that are looking to locate in more amenity-rich, walkable environments.

“To minimize transportation issues and really appeal to not only empty nesters, but also millennials looking for a much more vibrant environment in which to live, work and play,” Meister said.

West Windsor, because of its close proximity to Princeton, would have little trouble attracting companies, Meister said.

“But, what we are hearing, and what is a strong trend in the country and other areas we do business in, is that companies that are investing in their workforce are looking for opportunities (that) we have on our site,” Meister said.

HHC said changing the designation of the land to redevelopment, because of the “obsolete” buildings, is essential.

“We believe there could (also) be an opportunity without the redevelopment designation, but we also believe designating it has significant advantages,” he said. “That approach has been embraced by other locations in New Jersey and has the benefit of actually providing the township with better controls during the planning process as well as directing more tax revenue directly to the municipality.”

Tax losses — and costs — are becoming a key issue for HHC.

The company also pays for daily security on the site.

Despite a focus on smart growth development, Meister said the company is playing the long game for this site.

“I believe this is a long-term trend, but we’ve also emphasized that the site would be developed over a long period of time and in phases and can be adapted to market conditions,” he said. “But this movement toward walkability and mixed use and connectivity certainly long-term and this is the most sustainable approach to take.”

Meister thinks the township needs to consider all options — and move on one.

“No one has a crystal ball, but, as market conditions change, everyone needs to adapt,” he said.

HHC said in the lawsuit that it has continued to own the site and work on development plans — all at a significant cost to the company — with nothing to show in return.

“(HHC)’s efforts to find a potential user of the site under its current zoning have been unsuccessful,” according to the suit. “Absent either a redevelopment designation or a conventional rezoning, there is no economically viable option for development of the site.”

Why Gibbons was eager to increase its participation in VOICE Summit