Home Health Care For Murphy, Quest Diagnostics ribbon-cutting is example of what can be
Facebook
Twitter
Linkedin 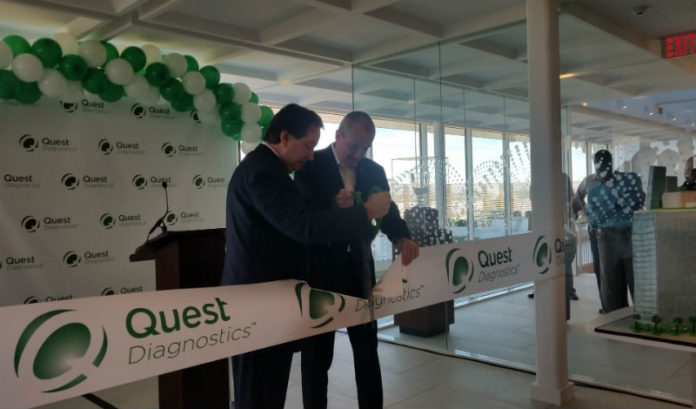 Murphy said he hoped that other CEOs would look at Quest, a Fortune 500 company, choosing New Jersey and follow suit.

“We have a newfound will, in addition to our natural assets, to use our advantages to their fullest potential,” he said. “I hope that somewhere, the CEO of another forward-looking, innovative company is listening to us and saying, ‘You know what, if New Jersey works for Quest, then I’ve got to look there, too.’”

Murphy spoke of the density of the talent pool in the northern region of the state, proximity to New York City, view of the city and transportation in the area. Murphy also hinted at his upcoming economic development trips abroad.

“As I’ve said to so many people across the country and, soon, around the world: Since I took office, New Jersey is going to be, once again, the state that no business will be able to overlook,” he said.

Quest has 3,000 jobs in New Jersey and is part of the health care ecosystem not just in the state, but across the country.

About one-third of the U.S. population uses Quest for lab services and other health care services, according to Rusckowski, and the company has strong relationships with physician groups and major hospital systems in the state, such as Atlantic Health System, Hackensack Meridian Health and RWJBarnabas Health.

“We’re very much in the infrastructure providing health in this country,” he said. “You probably don’t realize we’re about 2 percent of health care cost.”

Murphy called Quest an iconic New Jersey company for having its roots in the state and choosing to remain.

Rusckowski told ROI-NJ after the ribbon-cutting that choosing New Jersey was an easy decision, since the company’s largest lab is in the state, so proximity to it is necessary.

“That’s in New Jersey, serving New Jersey, but also the major metropolitan areas around us, so it’s a great physical location. So, one of the considerations is taxes, but the second consideration for us is costs and proximity to serve,” he said.

Quest was approached by several other states and deliberated a move before receiving a tax incentive for $6,250 per job for the nearly 600 jobs it kept in the state, annually for the next 10 years.

Charity care funding to remain unchanged at $262M — but, this...