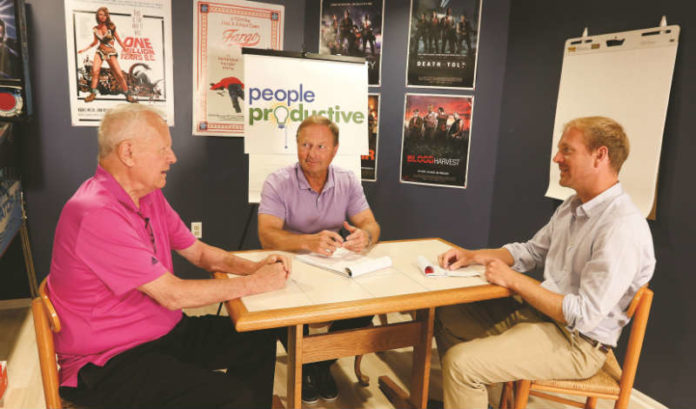 It was in his prior career, Frank Wander said, that he often found himself wanting to measure, manage and motivate the workforce in a better way.

“I began to wonder, what truly drives productivity?” he said.

Wander studied more than 75 years of research on psychology and sociology in the workplace, he said.

Then he considered his own experiences working for companies such as Merrill Lynch and Prudential Financial.

Finally, Wander decided to create PeopleProductive, a technology-driven consultancy to help companies develop winning cultures that employees want to be a part of and do their best work at.

“Even in this digital era, the skills of the future, such as resilience, agility, collaboration and more, are human,” Wander, founder and CEO, said. “Therefore, talent is really what it is all about.”

In 2014, Wander and his team decided to slowly and strategically grow the company from the ground up, he said.

“There often was a lot of unrest within otherwise-successful organizations,” he said. “People were never trained in emotional competencies and skills.

“It is an incredible gap, especially when people who are emotionally skilled are predictably more successful, build better relationships and foster deeper connections.”

Based on his research and work history, Wander began to develop three key ways in which company leaders can work to solve most issues:

Designed to accelerate the overall performance of the workforce, PeopleProductive utilizes proprietary software to help companies alter and evolve culture while improving their bottom lines.

“As companies move toward robotic process automation and artificial intelligence, always automating for speed and efficiency, the people who are left will be more important than ever,” Wander said. “Future innovation will be idea-based.”

Using the mobile application, companies can now strengthen their cultures and better engage their employees in just 15 minutes per week, he said.

Teams begin with a “warmup” by individually answering a few questions each week to be assessed and scored on a 10-point scale by the intuitive mobile application.

“To achieve a human emotional outcome such as belonging, for example, an emotional need must be met, such as inclusion or acceptance,” Wander said.

“An example question might then be, ‘Do team members notice when their co-workers are struggling and provide support?’” Diachenko said.

“Whatever the lowest-scoring emotional need was that week in the warmup, that is what the team will work on,” Wander said. “We create powerful conversations within teams so that people can suddenly have a context, week by week, in which to understand emotional needs, the feelings that go with them and be given ways to recognize and discuss them.”

The goal, Wander said, ultimately is to have solutions providers sell PeopleProductive’s platform.

But, for now, a staff of 14 works hard to make sure companies are aware of the perks that come with the cost.

“Our pricing begins with a $10,000 starting fee,” Diachenko said. “Then, there is a simple, scalable subscription fee, which starts at $15 per month per user and scales down as additional users are added.”

The company, however, has its headquarters in Cambridge, Massachusetts.

In fact, several high-profile clients already have signed up.

And the Boy Scouts of America signed up after experiencing the culture shift after inviting girls to join the organization.

The biggest win, however, was partnering with Stop at Nothing, a leadership development company, Wander said.

“Stop at Nothing was spinning out a new company called Conscious Business Insight,” Wander said. “They paid us to build into our solution and merge their Real Leadership 360 with ours for a greater cultural assessment.

“Now leaders can see how their behavior is showing up in the culture of their particular division.”

The software is now live at two companies in Mexico.

“Early projections estimate we will earn $2 million in revenue over the next year or so,” Wander said.

“We have a lot of ideas we are kicking around,” Killion said.

For example, the company currently is in discussions with Columbia University, Rutgers University and the County College of Morris.

The company also is interested in developing training and certification programs for clients, such as certifying “cultural engineers” tasked with building intentional and powerful cultures within their organizations or training employees whose jobs are being replaced by technology in additional soft skills.

Lastly, PeopleProductive is seeking a fitness partner in which to incorporate wellness exercises into the mobile application.

Whatever the industry or opportunity, Killion said, PeopleProductive is finally ready to expand.

“What we’ve developed applies to any sort of organization, including nonprofits, education, professional services, and more,” he said. “At some point, too, I think we should be tackling the government agencies that all are currently toxic.”