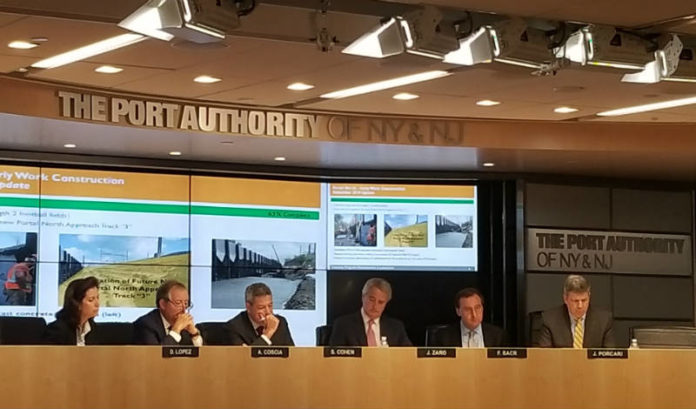 Ernst & Young has been chosen as the financial adviser for the Gateway Development Corp. to help move the Gateway Tunnel Project forward, the board announced Friday morning.

This will include decisions that need attention over the next several months, into 2019, so the GDC can pursue procurement for the project.

The adviser’s fiduciary duty will be to the GDC, but the fees and charges will be handled by the Port Authority of New York and New Jersey as part of a $44 million set-aside the Port Authority board of commissioners authorized earlier this year.

Cohen said the financial adviser role was always a part of the timeline and unrelated to the tussle with Washington, D.C., over federal funding.

The federal government remains uncommitted to earmarking funding for a portion of the project; meanwhile, both New York and New Jersey have committed their portions of the local share.

Interim Executive Director John Porcari said there are a lot of other moving parts that are in the works, such as the design of the tunnel, which is now at 30 percent completion.

“There’s a lot of technical work and interagency cooperating that’s all teeing up to get us to construction when the finance deal comes together,” he said.

All members of GDC reiterated it is a project of national significance and remain confident the federal funding will come through — whether through transportation or national security funding.

“It doesn’t matter how you earmark the money,” Cohen said. “The reality is, we’re living in a world where physical security and economic security, and what it means to be secure, have become a blended concept. This is not an academic exercise.”

The GDC anticipates hearing by the end of January about any federal funding commitment.