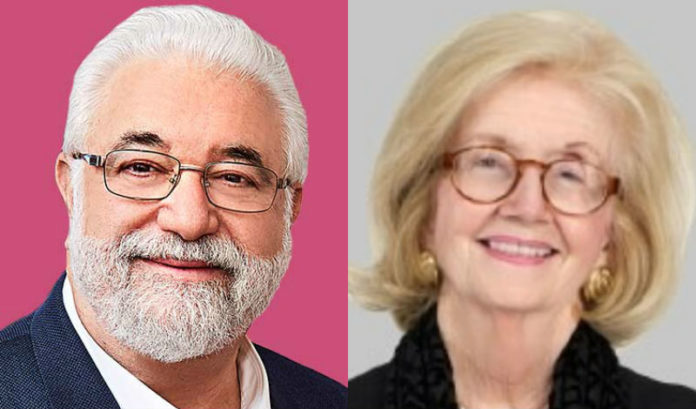 Neil Mullin, founder of Smith Mullin, sees sexual harassment as a problem much bigger than the law. To him, it is a societal issue.

While it may have come to light during the #MeToo movement, Mullin told the audience at the annual Jewish Law Symposium last week at Birchwood Manor in Whippany that it has been a constant in history.

“Sexual harassment is a problem of patriarchy,” he said. “Going back years … women have been third- and fourth-class citizens.”

“We’ve created a legal system that has significant impediments to women asserting their rights against discrimination. The Supreme Court of the United States has unfortunately repeatedly upheld mandatory arbitration.”

The other problem is the secrecy with which such matters are handled, he said.

“Secrecy helps the problem get worse,” Mullin said before a crowd of several hundred.

Retired New Jersey Supreme Court Justice Virginia Long, who is currently counsel in the Princeton office of Fox Rothschild, gave a keynote on the issue. Others addressed it on a panel moderated by Rabbi Shalom Lubin.

Rosemarie Alito, co-chair of K&L Gates, said secrecy should not make it hard to come forward.

“The business community today, in many ways, is imposing even harsher penalties on companies who don’t have the kind of culture that Justice Long spoke about, or at least not striving towards the culture,” she said.

Long, who spoke prior to the panel, discussed the significant changes she has seen over the years in how women and the legal system have been handling sexual harassment.

“We know today from repeated empirical studies that numerical scarcity allows seeds of harassment to take root and amplifies the risk of that conduct,” she said. “The proof is in the pudding.

“As elsewhere, women have repeatedly reported being sexually harassed in law firms.”

Another panelist, Karen Kessler, CEO of Evergreen Partners, said the craziest thing that has happened to her is to be asked for talking points on how to break the news to a spouse when someone is involved in a developing lawsuit.

“We’ve actually been asked to even write talking points and have someone talk to their spouse because the case is about to go public,” Kessler said.

One thing that is changing is how some workplaces handle consensual relationships.

“Firms now have a policy where you actually say, ‘I am having a consensual relationship with so-and-so’ and put it in the file (with HR),” Kessler said.

It’s not a popular practice yet, but might catch on, she said.

Long said sexual harassment issues make a case for a change in corporate culture, including diversity and inclusion.

It is an issue that continues today in the highest level of businesses, including the boardroom, and has created greater push today for diverse leadership, Long said.

“This is not an HR issue,” she said. “It is an issue for the boardroom. We need to do this not just because it is profitable — and it is, we know diversity pays in every conceivable metric, and we know litigation costs and judgments and discrimination and harassment suits are astronomical — but there’s a more important reason to do so.

“In exchange for our privileged status as lawyers, we have a moral obligation to create ethical, fair and just workplaces in which there is a proportional share of power and every individual is respected.”

Will that end harassment?

“If the culture in our institutions changes, sexual harassment will be a thing of the past,” she said.