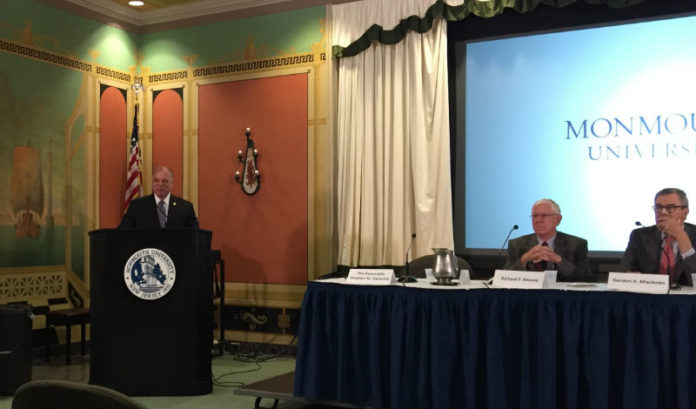 State Senate President Steve Sweeney has worked with (and battled) governors, members of the Legislature and public-sector unions throughout his public life.

On Friday morning, at a panel discussion at Monmouth University on the pension and public health benefit crisis in the state, he went after a new foe: the public.

Sweeney did not necessarily mean to attack ordinary citizens. After all, they are the ones who have helped him serve as Senate president for as about as long as anyone in state history.

The self-described ironworker from South Jersey said he cannot win the fight to make meaningful and necessary reform on pension and health benefit issues without them.

“The public has not stepped up the way they need to,” Sweeney (D-West Deptford) said. “I put this back on taxpayers to be honest with you. They need to get angry as hell. I’m serious.”

Simply put, Sweeney said it’s the only way he can get his colleagues in the Senate (and the same goes true for the General Assembly) to implement some of the changes his bipartisan Economic and Fiscal Policy Review Committee is suggesting.

“We need the public’s engagement,” he said. “If the public just continues to say we can’t do anything about it, then nothing will get done.”

The other panelists all agreed.

And they agreed it’s not an easy thing to do.

Tom Byrne, the former chairman of the state investment council and co-author of the often-sourced Byrne-Healey report on reducing public sector benefits, said it’s hard to make the public understand how the issue impacts them.

“Getting people to connect the dots between so many of these things (is hard),” he said. “There’s no perfect correlation.

“(But) if you look at our state’s GDP, it’s been growing much more slowly over the last 15 years or so than the nation. We’re in the bottom percentile of all the state’s in the nation. That directly translates to job opportunities.”

Peter Reinhart, director of the Kislak Real Estate Institute at Monmouth, said the general public needs to know the minority opposition is controlling the conversation.

“You cannot let this conversation be dominated by trade groups,” he said. “You have to come out of the back woods and come forward and make your voices heard.

Sweeney knows this as well as anyone.

He said he is as pro-union as they come.

Sweeney, who faces opposition from unions during every election, said he will continue to take them one.

He said the state needs to do if it is every going to right itself.

“At the end of the day, things work out when you have a balance table,” he said. “This scale has been tipped. And I’m telling you, I’m ready to go to war on these issues, but the army is the public.

“When the public speaks up it’s amazing how the elected officials respond. When it’s only the special interests in the room, it’s harder for me to convince my members that this is the right thing to do when only certain groups are hollering. So, we’re in it together, it’s a hell of a lot better than when you’re on your own.”

He and members of his commission are going across the state, trying to raise awareness. He said he has created a platform and a plan for the public to engage.

Sweeney knows, however, what he is likely to find.

“I guarantee when we go to public meetings there will be public employees screaming us down,” he said. “And I’ll stream those things to my members (and) my members won’t want a taste of that.

“But if we can fill the rooms with taxpayers, I guaranteed we’d have a different outcome.”