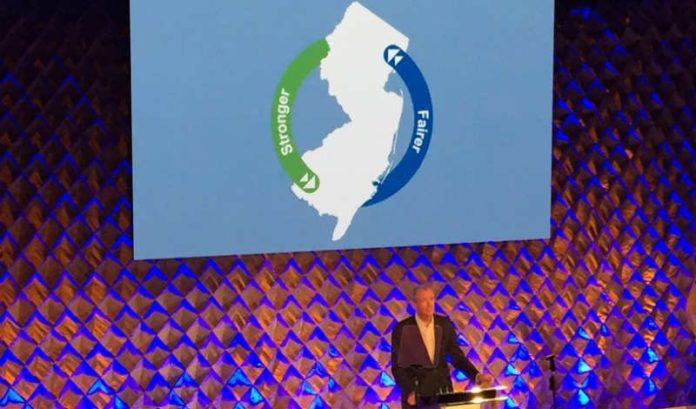 Gov. Phil Murphy released a detailed vision and five key goals of his economic growth plan in a major policy announcement attended by more than 600 business leaders and elected officials Monday at ON3 in Nutley/Clifton.

The 64-page document outlines statistics for New Jersey, including where the state leads and where it trails other states and its Northeast peers.

The governor said he intends to grow the economy with five key metrics in the coming years:

“Our vision, aspirations and strategies to advance New Jersey’s economy reflect a truly distinctive approach to economic growth, which fully leverages our strengths and includes all of us. To unlock long-term, resilient economic growth, we must create a New Jersey economy that is both stronger and fairer,” Murphy said in the plan.

“An environment where small businesses, local entrepreneurs, multinational corporations and workers can thrive is essential for our economy’s future.”

Murphy highlighted the high level of education and graduation in the state overall, paired with the outmigration of that potential workforce.

To address the issue, Murphy said he will create a task force.

“We will commission a ‘Future of Work’ task force — one of the first in the nation — bringing together government officials, academics, corporate pioneers, labor union leaders and communities to truly understand and assess the impact technological advancement will have on our state’s residents,” he said in the report. “From increased automation to more flexible working environments, the ‘Future of Work’ will be a thought leader to help New Jersey, and the nation, develop new solutions for the emerging challenges our workforce faces.”

Murphy discussed a number of other issues in the report, including saying:

Educated population: We have a workforce uniquely rich with highly skilled professionals. There are more scientists and engineers per square mile in New Jersey than anywhere in the U.S. More biochemists and biophysicists call New Jersey home than any other state. These professionals are not only skilled, but also diverse. New Jersey has one of the highest concentrations of top foreign talent and the third-highest concentration of foreign-born residents in the U.S. Approximately 45 percent of us are racial minorities, and we rank fourth in the nation for linguistic diversity.

Headquarters: We are home to 21 Fortune 500 companies, operations of 13 of the top 20 global pharmaceutical companies, 16 of the fastest-growing tech companies in the country and more than 400 biotechnology companies.

Economic growth: During the last 10 years, New Jersey missed the economic resurgence burgeoning in other parts of the country. Employment growth has been meager at just 0.1 percent annually, leaving New Jersey 42nd in the nation. Between 2007 and 2017, New Jersey’s economy added practically no net new jobs (approximately 50,000 jobs). For comparison, during these same 10 years, the average state added nearly 175,000 jobs.

Workforce stats: New Jersey ranks 32nd for the share of working-age population in the labor market and 47th in long-term unemployment in the country.

Poverty rate: Poverty in New Jersey is increasing at a faster rate than 46 U.S. states (New Jersey is ranked 47th). Basic everyday needs such as housing, child care, food and health care, are out of reach for 37 percent of New Jersey households.

New business: Young businesses, those less than 10 years old, are a key driver of economic growth as the largest job creators in the U.S. economy. While New Jersey boasts a competitive number of startups, these new businesses exit the market sooner than new businesses in our peer states. Of large companies in the U.S., those with more than 500 employees, 11 percent are less than 10 years old, compared to 5 percent in New Jersey — meaning we are not scaling our innovative companies fast enough.

Diversity and inclusion: The increased inclusion of women and racial minorities in the U.S. economy has accounted for more than 25 percent of the productivity growth that the U.S. has experienced over the past 50 years. Similarly, communities with greater levels of racial integration and inclusion lead to more productive, financially wealthy innovation ecosystem.