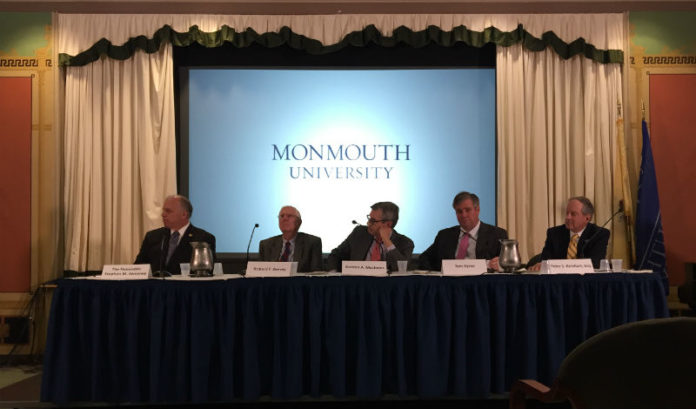 During his 30-year run in the New Jersey Legislature, Joe Kyrillos earned a reputation as a straight shooter — and someone who was respected on both sides of the aisle.

So, it wasn’t surprising that Kyrillos — in his first public event as the public servant-in-residence at Monmouth University — would describe the state’s pension and health care benefits problem in straightforward terms.

“At its core, this is not about philosophy, it’s not about ideology — it’s a math problem,” he said to an audience of more than 100 last Friday.

Kyrillos was moderating an all-star panel on what should be the most important issue in the state. Not just to legislators and business owners — but taxpayers.

Let’s be clear. This is a big issue. By most estimates, the state is $115 billion behind in its pension obligations. On top of that, the “Cadillac” health benefits plan state workers get from the government — which means it is paid for by taxpayers — is quickly bankrupting the state.

At least that was the feeling of the panel made up of Senate President Steve Sweeney (D-West Deptford), Richard Keevey, Gordon MacInnes, Tom Byrne and Peter Reinhart.

To be clear, the state is in this mess because governors (of both parties) have avoided making full pension payments for more than two decades. But that fact doesn’t lessen the issue.

As Kyrillos pointed out, $7 billion of this year’s $37 billion budget went to pension and benefit costs. That number is estimated to grow to $12 billion in five years (which will be 25 percent of all revenue that comes in) if nothing is done.

“The future of New Jersey is bleak,” Keevey said.

The panelists had plenty of good remarks during the more than two-hour event. Sweeney’s plea to taxpayers to make this a big issue is chronicled here.

The following are a number of other interesting quotes from the event. They have been edited for clarity.