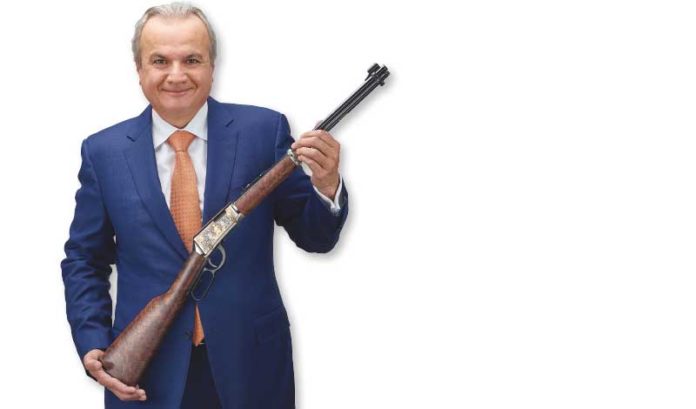 Henry Repeating Arms, the largest lever-action firearms manufacturer in the world, is located in New Jersey. The company, in fact, is celebrating its 10th anniversary in the state this month.

Don’t know the company? That wouldn’t be surprising.

For starters, Henry’s does not have any identification on its Hudson County headquarters (for security reasons), owner and President Anthony Imperato said.

And, since it’s a gun manufacturer, it does not sell directly to consumers.

But you should know this: It is a thriving business.

Henry’s employs more than 225 people — up from about 100 when it moved to New Jersey from Brooklyn in September 2008. And while it doesn’t release revenue, Imperato said the company ships approximately 300,000 guns a year.

But he emphatically says he has no plans to relocate. And certainly not out of the country.

Imperato proudly states the company’s slogan: “Made in America or Not Made at All.”

ROI-NJ talked with Imperato about how his family got in the business, how he plans to grow Henry’s and numerous issues involving the manufacturing and selling of firearms.

The following is an excerpt, edited for space and clarity.

ROI-NJ: Most people don’t think of New Jersey when they think of a firearms company. Give us a little bit about your history in the industry — and how it came to be in this area.

Anthony Imperato: My family’s been in the gun business since 1911. We owned a gun shop in downtown Manhattan that, for decades, was primarily a police equipment shop. My father developed a wholesale firearms business in the 1950s and later bought Iver Johnson Arms in the late 1960s (both of which he later sold).

I grew up working in my grandfather’s police equipment shop. And then I began learning about manufacturing at Iver Johnson’s before I began working the wholesale business side. I’ve had my hand in many different areas of the business. We got back into manufacturing in the early ’90s, with a licensing agreement we had with Colt to make their historical firearms from the Civil War era. Then we bought the rights to the Henry’s name.

We started the company in 1996 in Brooklyn and started shipping the first guns in March of 1997. I bought the building in New Jersey in March of 2007, but didn’t move in until September of 2008 because it took over a year to renovate.

ROI: Why New Jersey? Why not somewhere in the South, where you do more business?

AI: We moved here specifically because we wanted to still be within the tri-state area, where we had a number of vendors. And we wanted a place where our employees could still come from New York City. We also wanted to mimic what we had in Brooklyn, being in an industrial/residential neighborhood where people could walk to work. It has worked out well.

We have another factory in Wisconsin, with over 300 employees. It was a company that used to make parts for us. In 2006, they were going out of business, so I decided to buy the company and the plant.

ROI: How does being in New Jersey impact business?

AI: It doesn’t at all. The way the gun industry works primarily is that manufacturers sell to wholesalers, what we call distributors. Those distributors sell to the retail stores and then those dealers sell to the consumer. There’s an online portion of the gun business, but online retailers still have to deal with shipping of the firearm to a local dealer.

We have about 12 different distributors based around the country, and they in turn supply retail outlets. All of the major big-box retailers carry our guns: Cabela’s, Bass Pro, Gander Mountain, Scheels, Dunham’s Sports and Academy Sports. Every one of them carries our brand, and so does every independent and privately-owned gun shop around the country, including many in New Jersey: Caso’s Gun-A-Rama in Jersey City, Garden State Shooting Center in Lakewood, The Silver Bullet in Rockaway, The Gun Rack in Vineland and Cheyenne Mountain Outfitters in Bordentown.

ROI: How is business?

AI: We recently sold our 1 millionth rifle, so business is good. We’re sold in 40 countries around the world, with Canada and Australia having the most sales. But, we are strongest in America. And we are strongest in the South. We have the most sales in Texas, mainly because of its size. On a per-capita basis, Kentucky is our biggest selling state.

As far as competition, there is Marlin Firearms, which is owned by Remington. Additionally, there’s Winchester and a Brazilian company named Rossi.

ROI: Let’s talk advertising and branding. Henry’s has begun promoting its brand through sponsorships at athletic-type events, both MMA (through Donald “Cowboy” Cerrone) and auto racing. Explain how that came about?

AI: The sponsorship with Cowboy Cerrone is part of our marketing effort to acquaint a younger generation with classic American-made heritage firearms. He’s a gun guy. He’s got a lot of energy and he’s got great personality. So, we felt he was a good fit for us. We’ll be looking for other avenues like that to talk to the younger generation.

As far auto racing, my son races in an IMSA GT Cup Series, so we’ve acquainted ourselves with racing over these last three or four years. Now, we are dipping our toe into NASCAR. We think it could be the right audience for us, since our strengths are in the Southeast, where there’s a NASCAR stronghold. We’ve been able to mix guns and gears well over the last three or four years, but it’s a sidebar thing for us.

As far as who we are as a company, our Guns for Great Causes program is more in line of who we are. We work with veterans’ organizations, with sick children’s hospitals, wildlife conservation organizations, etc. All of those things are pretty strongly aligned with the brand.

ROI: Speaking of branding, talk about your slogan: Made in America or Not Made at All.

AI: That’s the biggest part of our DNA. We started this pro-American concept back in 1996. Our original tagline was, ‘Made in America and Priced Right.’ We wanted to differentiate ourselves from a lot of the imported product that was coming in that sector of the marketplace at the time. Made in America in these last few years has become an emotional trigger, but we’ve been riding that since we started the company 20 years ago.

And right alongside that is our commitment to customer service. I believe we have the best customer service in the outdoor industry. We are well known for that. Our reputation is etched in stone for that.

I always take it very personally that someone is going to spend their hard-earned money on a Henry. If they are going to spend a few hundred dollars on something we’ve made, we better get it right for that person. I’ve always respected that process.

ROI: Let’s get to ‘gun’ questions. The types of firearms you sell are not the type of firearms that have been involved in the recent mass shootings or in urban areas.

AI: We have hunting rifles. We have rifles for cowboy-action shooting, we have rifles for plinking and target shooting. We have all the caliber rifles for varmint hunting and pest control. We have a whole collector’s series and tribute editions, such as when a young man earns his Eagle Scout. We make single-shot shotguns and we make lever-action shotguns.

ROI: Is it true that any calls to limit, control or abolish the sale of guns actually helps your business?

AI: Yes. Any threat to the gun industry with potential new legislation most often leads to increased sales across the board. When there’s threats to the industry, Joe Consumer gets upset and says, ‘I’m going to go buy another gun.’ That’s how it works.

ROI: Fairly or not, Henry’s will be put in the same pool as every other gun manufacturer by those who want to outlaw guns. Are you concerned about any backlash you could receive?

AI: I’m not. We just speak the truth. I’m not afraid of any backlash. If someone is anti-gun, they are anti-gun. I can talk to you about this for hours, because I’ve spent 40 years in the gun business. I grew up in Brooklyn, in an urban area, but I also have traveled extensively throughout America.

I understand rural America and the Heartland as much as I do city life. I can talk to you about the gun situation until we’re blue in the face. And you know, when you get to this topic, there are different specific layers of it.

Our industry is full of good people. We don’t want to see tragedies. We don’t want to see urban crime. Urban crime is a huge topic in its own right: It’s historical, cultural, social, economic, psychological — it’s a deep, complex problem. If you cure that problem, then people pointing the finger at the gun (as the problem) goes away. In short, that’s the answer.