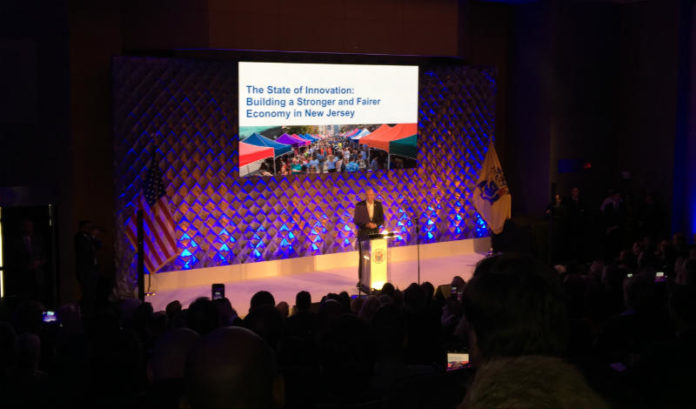 Legislators and some other advocates, meanwhile, are warier of the work required to craft legislation to meet some of the goals.

Michele Siekerka, CEO and president of the New Jersey Business & Industry Association, said that, while the organization has been calling for a plan for economic growth in the state, and it is excited about the governor’s new plan, the recent business tax hike and ranking of the state’s business climate puts the plan at odds with reality.

“What we heard today was very good, but we need parallel paths,” Siekerka said after Murphy’s Monday afternoon announcement.

“While we’re planning, we need to reform. In particular, we just came off the heels of a bill last week that is costing New Jersey businesses millions of dollars more in taxes. It affects the exact innovators that we are looking to grow in the state of New Jersey. And we are concerned that those types of tax programs are going to stifle innovation, not grow it. And we have publicly called on the governor to veto that CBT cleanup bill.”

Some legislation and executive orders have already set the tone for some of the initiatives the governor outlined — including a blueprint for public-private partnerships.

Assemblyman Andrew Zwicker (D-Monmouth Junction) said he has also been in touch with the state Economic Development Authority to determine how to craft some of the legislation.

“With what’s happening here today, we should have everybody moving together,” he said. “The real thing is about making sure people understand that the ROI for a state that is in the economic position that it isn’t how do we do this.”

The proposal of a state-funded venture fund is not new, but the way Murphy has proposed it — leaning on buy-in from the private sector — is a differentiator, Zwicker and others said Monday.

“We know other states have appropriated money out of the budget — Massachusetts does this, Pennsylvania does this — so, by doing it by the auction, it’s getting larger companies in on this, so everyone is on the same page,” Zwicker said. “We need to make sure people understand … that this is a proven job creator and for economic development.

“That is harder than getting the policy right, which we’re doing. We already started before this announcement. So, that’s why I think it is different than sometimes things that are rushed.”

Tim Sullivan, CEO of the state EDA, said there were some things the agency could do without legislation.

That includes creating a new small business lending program, a small business office and a loan for brownfields. The new office is likely to have at least two women- and minority-owned business outreach coordinators.

But the tax credits and incentives require legislation — which means the Legislature is going to have to work with the administration to get anything done.

“We’re eager to get into that process and have those discussions,” Sullivan said.

Meanwhile, many remain optimistic about the 64-page plan the governor unveiled Monday.

Tom Bracken, the CEO of the New Jersey Chamber of Commerce, said Murphy’s plan is a much-needed step in the right direction.

“The master plan he described in his speech today is exactly what we believe our state needs to ignite new economic growth,” he said. “The governor is correct that innovation is the catalyst to a robust economy and a state that invests in innovation is investing in its people and its future.

Garrett was on-site for the announcement, which took place in the building near the health system’s new medical school — which is on the former Hoffmann-La Roche campus in Clifton and Nutley and part of the same business park.

“I think the governor did a good job balancing the initiatives that are needed to make the economy grow,” he said. “I loved the focus on innovation. When he said innovation is part of our DNA here in New Jersey, you know that’s part of our mission statement at Hackensack Meridian — that innovation is in our DNA.

“I don’t know which one came first, his or ours, but it doesn’t matter. I feel like we’ve set up an innovation hub here, another he talked about in his speech in New Brunswick also (“The Hub”), which is exciting, and I think that’s really going to be the key. Bringing new industries to New Jersey, reinventing existing industries so they’re more innovative and giving them incentives so they become more innovative, and really attracting the workforce … I think those are all the successful ingredients to keep the economy growing.”

In addition, the governor’s focus on repurposing the EDA and its tax credits will help the state succeed, Garrett said.

“That can really make a profound difference. Those aren’t just words, that’s substance.”

Dean Paranicas, CEO and president of the Healthcare Institute of New Jersey, said the governor’s plan is forward-thinking, and one that the life sciences industry can embrace.

“Our industry, life sciences, is all about innovation,” he said. “Obviously, the governor is looking to embrace the entire industry from established, very large base of local companies as well as the biotechs in the future. So, all in all, I think it’s encouraging and certainly lays a really positive foundation.”

But the governor’s plan isn’t all business. It focuses on social aspects, too. That impressed New Jersey Institute of Technology President Joel Bloom.

“I am very pleased to see the emphasis Gov. Murphy is placing on higher education’s role in developing the workforce necessary for our economy to thrive in the future,” he said. “I also support his goal of growing the educational attainment of students from low-income and underrepresented populations.

“NJIT is a perfect example of how higher education can improve the economic outlook of students and entire families from the lowest income brackets while simultaneously strengthening and diversifying our state’s entire workforce.”

Other organizations and regions also touted the focus on helping distressed urban areas included in Murphy’s plan. The issue had been a central point in the criticism of existing incentives — including those that targeted favored cities like Newark, Camden and Atlantic City.

Instead, Murphy has called for a broader effort on urban areas with a focus on mass transit assets.

Kris Kolluri, CEO and president of the Cooper’s Ferry Partnership, voiced his support for this new formula.

“We welcome the governor’s focus on ensuring cities like Camden continue their renaissance,” he said. “Investment in people and new housing, along with targeted incentives to attract companies, are needed to ensure the growth is sustainable.”

John Harmon, president of the African American Chamber of Commerce of New Jersey, said the focus on distressed cities and minorities is a significant positive step from the state’s highest office.

“I like the focus of the urban communities and, specifically, Trenton as one of the most historical landmarks in America and how we resurrect that to be an economic engine. But, more specifically, I like the Evergreen fund and incentivizing corporations to take part in the tax credit program,” Harmon said. “That, in itself, is innovative and forward-thinking. From what I’m hearing, it’s a more comprehensive approach with a potential to hit the mark this time for all of New Jersey. It underscores the governor’s theme of a stronger and fairer economy. I do see us in the narrative this time.”

Bracken said he hopes the speech helps the state get back to the basics.

“We agree with Gov. Murphy’s assertion that New Jersey must return to the most basic elements of economic growth — leadership and vision,” he said. “Today, the governor supplied both.

“Now that we have this foundation, the New Jersey chamber hopes to join with state leaders, business, labor and all stakeholders to help build a stronger and fairer economy. To truly achieve that goal, we must simultaneously address the issues of affordability, competitiveness and outmigration, which are the top concerns of businesses in New Jersey today.”