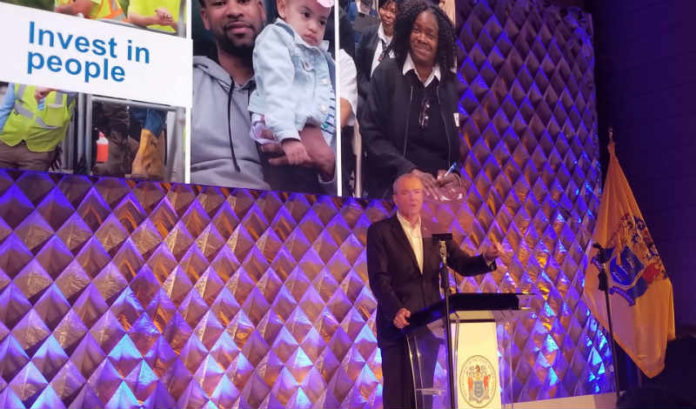 James Barrood, the president of the New Jersey Tech Council, said the economic proposal Gov. Phil Murphy proposed for the state Monday could be a huge plus for the tech sector — because it will do the one thing the sector needs the most.

“It will attract entrepreneurs and inspire startups to start their businesses here,” he said.

Aaron Price, who heads Propelify, the state’s version of SXSW that takes place in Hoboken, agreed.

“There is no doubt that having a fund that invests in startups, at such a broad scale, is a great move,” he said. “My understanding is it will all be administered through existing venture capitalists. I think that’s the right way to do it. I think it’s very exciting. I think it’s exactly the shot in the arm that a startup ecosystem needs.”

“We have an incredibly engaged corporate community — including Audible, Prudential Financial, Panasonic, the Economic Development Authority and so many more — that are invested in seeing our state succeed and supporting technologies that change the way they do business. In addition, we are a short train ride from the corporate resources of New York, with a more manageable cost of living and doing business,” Borok said.

“Attracting more startups to New Jersey would be transformative for the state. Not only do startups grow jobs and attract young millennial talent, they have a ripple effect for taxable income and revenue. We are seeing their effects firsthand in Newark, where our tech ecosystem is expanding by the day, our companies are growing and our founders are building a thriving community.”

Don Sebastian, president of New Jersey Innovation Institute, also has a formula that has been working for some time.

“The idea of creating, throughout the state, technology hubs — different, not competing with each other — then collect, densify small companies, it makes it easier for big companies to find either the next-generation project or even the people doing the next-generation product, and makes it easier to attract venture dollars just by virtue that we have hubs of activity,” he said.

“What’s particularly attractive here is, not only does the state dollar-match the Evergreen fund, making it only easier for the venture companies to come in and get real bang for their buck, but you’re also getting the buy-in from the big companies because of their tax credit dollars — they are getting access to this program by virtue of their willingness to work with the small companies. So, you’re getting all the pieces we want — big companies, small companies, investment, government stepping in to fill voids where the marketplace is broken.”

Sebastian also supports the governor’s commitment to rebuilding the manufacturing sector, which can be a source of regrowing middle-class employment.

“Right now, so much of the VC investment is focused on apps,” Sebastian said. “It’s understandable, because that’s quick turnaround. It’s very easy to see your five-to-one investment roll up, or 10-to-one, in a short period of time. But when you’re talking about developing drugs and the FDA 10-year approval cycle, of a new device that takes time to prototype and market and so on, that requires a different investing mentality.”

Barrood added that the devil will be in the details.

Price said he is optimistic, but his years of heading the New Jersey Tech Meetup have taught him a few things: Patience is necessary. And nothing is as easy as it seems.

He feels this plan may provide the necessary guidance.

“I know that, historically, government has not been good at administering funds, and, so far, one of the things that shows a lot of promise is partnering with existing professional venture capitalists who do this for a living and letting them use their expertise to make the right bets,” he said. “That was my concern right out of the gate — it’s great that there’s so much money, but what’s the level of risk-aversion from the state going to look like. I think they are smartly saying, ‘We are going to really try and attract the professionals and incentivize New Jersey technology.’”

Feds to drop charges against Menendez