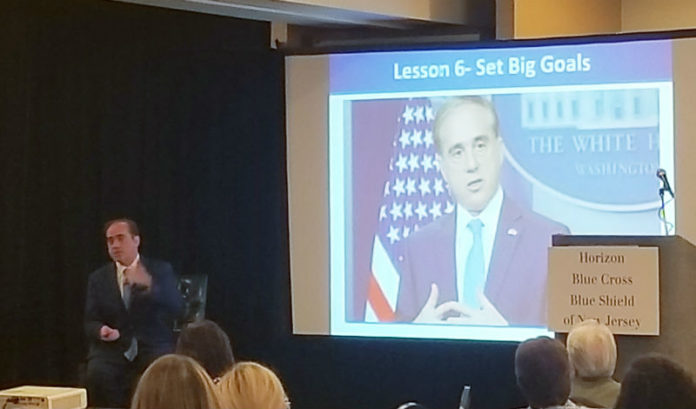 Former Department of Veterans Affairs Secretary Dr. David Shulkin returned to New Jersey on Tuesday evening to discuss his work at the VA, and commend New Jersey on some of its efforts in the health care space.

He was the keynote speaker, preceded by his former White House colleague and now commissioner of health in New Jersey, Dr. Shereef Elnahal, at an event hosted by Horizon Blue Cross Blue Shield of New Jersey in Woodbridge.

One of the most notable things Shulkin achieved during his time in the VA was an attempt to compromise between the wants of those screaming for privatization and those that believed in a single-payer system.

As the health care industry continues to be pulled in the direction of an all-payer system, in hopes to curb costs, Shulkin shared his insights on the issue.

“The reason why I think it’s an interesting model is because as you know so much of what happens in health care is limited by the reimbursement system and the financial barriers,” he said.

In the VA, there’s appropriated funding at the start of the year, which allows care to be provided without barriers.

But it also lacks incentives.

“So, the reimbursement challenges weren’t there, and the incentives weren’t there,” he said. “So, at the end of the year, if we had extra money, we gave it back to the Treasury. It wasn’t like we had the stockholders or even that there were bonuses that (drove) any of those decisions.”

But identifying how to best care for patients was not easy in this environment.

“Where I’m coming from is, it’s not surprising that we have political spectrums and differences in this country, almost on every issue. My answer was, if you’re really focused on the right thing for the veterans, you come out somewhere in the middle,” Shulkin said. “There are things that the private sector clearly does better and more efficiently, and, when that’s the case, that’s where veterans should get the care. But there were clearly things that veterans had specialized needs for that the private sector isn’t doing well. Without that, veterans would suffer.”

Which is where the voucher system originated from.

“So, I was driving towards an integrated system, in the middle, that took the best of the private and the best of what the VA can do. And of course, being in the middle in Washington (D.C.) is not a great place to be, unfortunately. Because, essentially, no one likes you,” Shulkin said.

In New Jersey, he said, there is a lot of innovation happening in the private sector, but it isn’t receiving the attention it deserves.

“It sits in the shadows between New York and Philadelphia,” Shulkin said. “New Jersey is actually ahead, but people haven’t necessarily recognized it. This is not an advertisement, but I do give credit to Horizon because they have been relatively, and I say relatively, open to partnering with physicians in ways that some managed care plans haven’t done. In order to change health care, you can’t just do it from the clinical side or the business side. It has to be both sides that take interest. That’s not happening in other parts of country, and New Jersey is ahead in that.”

Famed Far Hills steeplechase event, back after year off, set for...