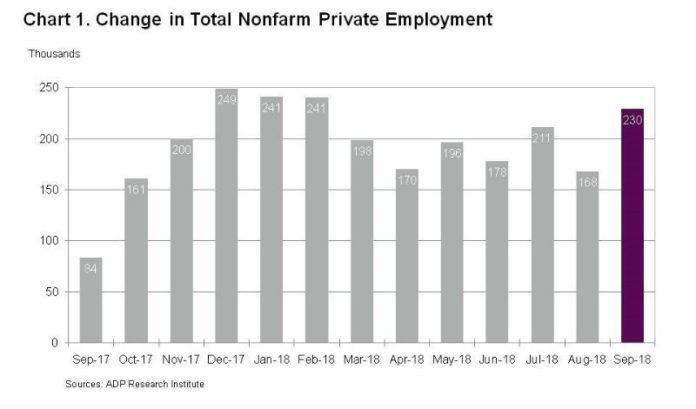 Private-sector employment grew by approximately 230,000 jobs in September, according to Roseland-based ADP.

The payroll and human services company said in its monthly ADP National Employment Report that the number of jobs grew by 230,000 positions from August to September.

“The labor market continues to impress,” Ahu Yildirmaz, vice president and co-head of the ADP Research Institute, said. “Both the goods and services sectors soared. The professional and business services industry and construction served as key engines of growth. They added almost half of all new jobs this month.”

Medium-sized companies with 5o to 499 workers were on top in September, adding 99,000 employees. Large-sized businesses with 500 workers or more added 75,000, while small businesses with under 50 workers added 56,000 positions.

Mark Zandi, chief economist of Moody’s Analytics, said, “The job market continues to power forward. Employment gains are broad-based across industries and company sizes. At the current pace of job creation, unemployment will fall into the low 3%’s by this time next year.”

Under the service sector, professional and business services added the most jobs, reporting an addition of 70,000, while education and health services added 44,000 and trade, transportation and utilities added 30,000.

Under the goods sector, construction added the most jobs, reporting an addition of 34,000 new positions, while manufacturing added 7,000.

The only sector to lose workers was information, down 3,000 jobs for the month.