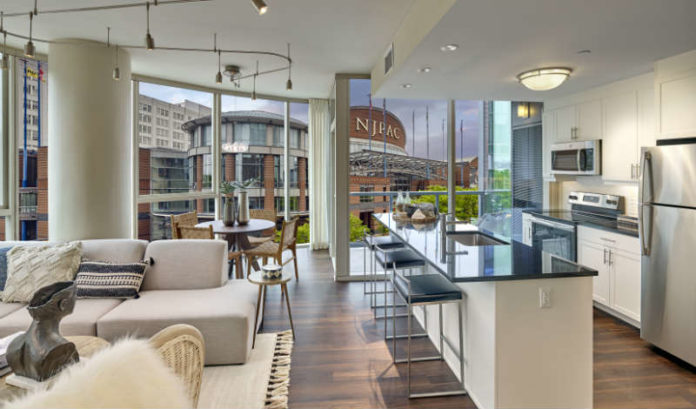 One by one, the developers and politicians took the stage Wednesday, trying to sum up what the grand opening of One Theater Square really meant for Newark.

Carl Dranoff of Dranoff Properties, the developer, talked of its Class A amenities — everything from its fitness center, game room, club room, outdoor courtyard, dry cleaning and state-of-the-art, top-of-the-line appliances.

“Today, as we look at this stunning 23-story building, with its wonderful 245 apartments, 285 parking spaces and four (yet to be announced) retail shops, it is clear that this is truly the game-changer that we were looking for,” he said.

John Schreiber, the head of the New Jersey Performing Arts Center — the organization that commissioned the project and worked hand-in-hand with Dranoff — said the finished project can stand on its own merits … anywhere.

“You could put this building anywhere in the world and it would be considered a Grade A residence,” he said. “That standard of excellence is one that other developers will want to emulate so that this downtown becomes a jewel.”

But Newark Mayor Ras Baraka may have summed it up best.

The beauty of the building is not what is in it or how it was built — but who it serves and what it represents.

It is a symbol, Baraka said, of all that Newark can be.

“The fact that 100 people have already moved in is proof positive that Newark has moved in an incredible direction at a very tremendous speed that people did not expect,” he said.

“It is a testament to what is going on in this city, to the great leaders that we have here, to the folks who are working around the clock collaboratively to make Newark a destination city.”

Then Baraka brought up the stat that sums it up the best.

This luxury property includes affordable housing, too, ensuring it serves all of the city’s citizens.

“People making $30,000 a year … there are units set aside for people making that little,” Baraka said. “That is an incredible testament to what we are doing in the city of Newark, trying to create inclusionary development.

“How we bring cities back is to make sure we have people from all diverse backgrounds living in metropolitan areas like Newark. This project is proof that it can be done and people will come live in here.”

Among the hundred who already have rented is Schreiber, who grabbed a unit on one of the top floors — an area that has perfect views of Newark and the surrounding areas.

And the fact that five of the six three-bedroom apartments — those going for approximately $4,450 a month for 1,432 square feet — are leased shows there is an appetite for luxury living in the city.

So said Michael Purcell, the director of leasing for Dranoff at the property.

Purcell said the 13 studios are taken — as is all of the affordable housing, 24 units renting for less than $800 a month that were parceled out after more than 800 applied.

“There is still a lot of interest; it has been a steady stream of lookers,” he said.

Dranoff said he isn’t surprised by the interest.

Proving people wrong, he said, is what the building has been doing since he won the right to build it more than a decade ago.

“We battled through many speed bumps and impediments along the way, including the Great Recession but especially the pundits who said we were too pioneering, that Newark was not ready for this type of luxury housing,” he said.

“With determination, persuasion and commitment, we have completed One Theater Square. We have conclusively proven the naysayers wrong.”

Those are words to live by for Baraka, who never misses a chance to invite more people to come see what Newark has become.

“All of us who live in Newark are very, very proud,” he said. “And all of you who are not from Newark have an opportunity to move in today.”

Manufacturing Caucus is good, but more is needed