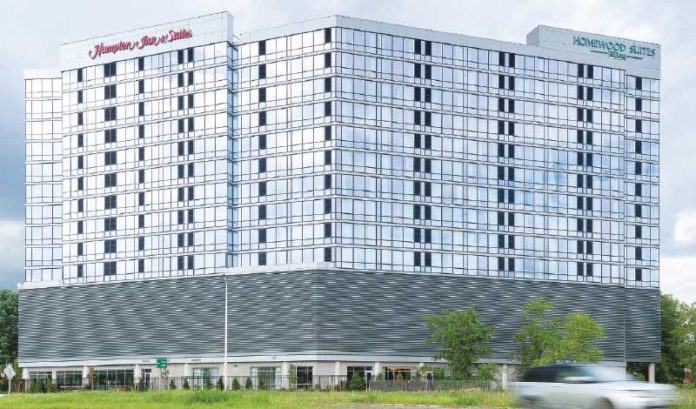 It’s about four years after that call was made. Sanzari, chief operating officer at Hackensack-based Alfred Sanzari Enterprises, said it was the right pivot.

“We took a look at the market and realized it wasn’t a good fit for an office building,” he said. “It just wasn’t the right direction. But we had this good footprint already within the hospitality industry and this market. We wanted a modern and unique hotel to build on that footprint.”

And a month ago, Sanzari celebrated the result of that decision-making: the opening of the 15-story, 350-room dual-branded Hampton Inn & Suites and Homewood Suites.

He believes it’s a hotel unlike any other.

“In our opinion, this was really a first-of-its-kind project in northern New Jersey, possibly beyond that,” he said. “I certainly have not seen a dual-branded hotel with a comparable design to this one.”

Across the two monikers the hotel operates under, there are some shared elements: a large lobby, fitness center, indoor poor and meeting space.

But amenities are also uniquely split up into rooms under the Homewood banner, which features kitchens and a grocery shopping service, and those under the Hampton Inn & Suites banner, which boasts a business center and other perks.

Dual-branded hotels, which industry commentators have opined could be the future of the hospitality sector in the face of fierce competition from Airbnb, offer a versatility that Sanzari expects to make it an industry standout.

“The reason it hasn’t been done more is the economics; it warrants more capital,” he said. “With that being said, we had a willingness to spend more. The reward is in the fact that this an asset that will be one of top-class service. That’s what we look for in a project.”

The reflective glass-covered hotel also stands out for its catering to a millennial demographic that is quickly encompassing a majority of the region’s consumers — adopting another trend that’s making headlines in the hospitality sector.

“We looked into what millennials want,” Sanzari said. “They want technology and convenience. So, among many other things, we’ve got digital keys for customers to use on their mobile devices to get into the parking garage.”

Sanzari has had high hopes from the beginning for the hotel, which is now being passed off to hotel management company White Lodging.

“What we set out to do was bring things up a notch in the region,” he said. “We wanted a hotel that would be around long after I’m here, and hopefully for generations to come after that.”

Airbnb is the elephant in the hotel room.

Ryan Sanzari of Alfred Sanzari Enterprises said that online marketplace isn’t part of the discussion when it comes to the development of projects such as the Hampton Inn & Suites and Homewood Suites in Teaneck.

But that doesn’t mean it’s forgotten.

“Although Airbnb didn’t play a factor in the way we designed this hotel or the way we’ll operate it, I’d be lying if I said it wasn’t a topic that comes up regularly in the hospitality industry,” he said.

“Whether it’s the rising number of options in the local Airbnb collection or the hotels that already exist in the region, we want to be No. 1 in a guest’s mind,” he said. “That means ensuring our guests keep leaving our hotels with a smile on their face.”